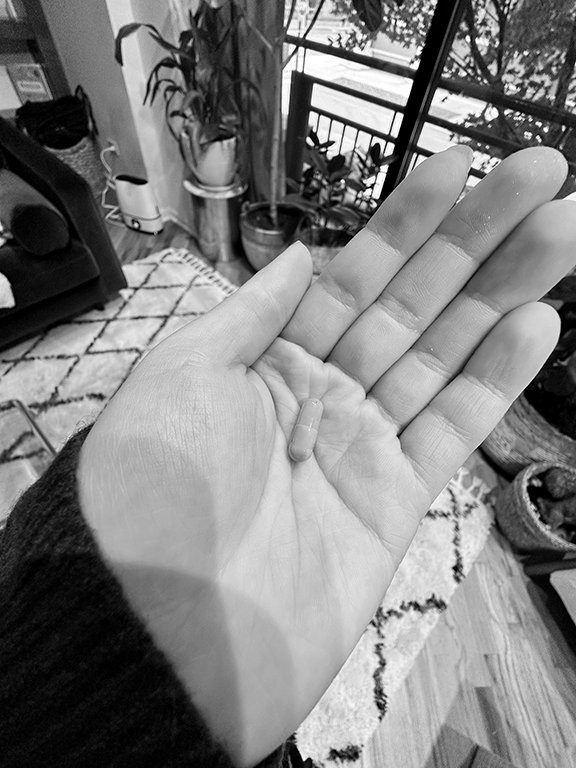 Early this summer on Instagram I posted about how my brain overprepared for basic conversations. At the time I felt it was a good conversation starter about being type A and highly anxious. One of my friends, themselves neurodivergent, sent me a gentle and humorous DM that also cut right to it. “Mmm, that sounds a little neuro-spicy.”

That hit me a little more intensely than I wanted it to. It was already in the back of my mind, but I wasn’t ready to confront “it.”

“It” started earlier this year.

Then I was tired. It’s okay, it’ll be better when I get through this time and am less anxious.

Finally, it was anxiety. I had nowhere else to go, I’d run out of labels.

Finally, it became “it.” My “it” that never left me or let up. Moments became days where I didn’t remember what I was doing.

As “it” increased, I remained steadfast in my commitment to not google what I suspected. I refused. Don’t give yourself ideas Alissa. Meanwhile, my brain fog got worse. Crippling.

My trainer and I made changes to my diet and exercise journey. We talked about how women’s bodies and brains change in their 30s. I went on a few more weeks and hoped I saw a difference. But once again I found myself with gaping black holes of where my day went that I wasn’t present for. Whatever “it” was, remained. I could never out exercise, rest or smart “it.”

It took months to get into a general practitioner after having a referral. It was summer when I scheduled and would be fall when I saw her, an entire season had to pass. Finally, it was time. And not a moment too soon. It came two hours after I had a conversation with my leader gently checking in to see if I was okay because they knew something was off.

When I arrived at the office I didn’t even know what to describe “it” as. Depression? Anxiety? Brain fog? I didn’t want to go in and have an objective to be labeled as something. Don’t lead the witness or shape the diagnosis to what I want it to be, I told myself. (As if I somehow had any control or knowledge of how to even do that in a medical sense.)

My new doctor talked to me for five minutes before she abruptly asked me if I had been tested for ADHD. I gulped. There it was. The thing I had refused to google or truly consider, but it had been there. I clearly looked shocked and she proceeded to tell me why she suspected this and why this wasn’t something she just handed out.

It’s very common for women to be diagnosed with ADHD later in life than men. In fact, most women are more likely to be diagnosed with depression, anxiety or bipolar than ADHD. A lot of women in their 30s find the symptoms to need medical assistance to help them as they grow in their lives, personal and professional. My doctor watched me as I shook my foot 100 MPH, cut off her sentences and had to re-read a question. Classic signs. The question about struggling with comprehension took me thrice to finish because I got distracted by…. air? Who knows.

She’d seen enough. We discussed a treatment plan. The preferred medication was of course denied by insurance. (Love the American healthcare system that gets to decide if I actually need medication prescribed.)

I walked out, feeling the relief of the invisible weight I was unknowingly carrying.

As I sat inside my car I felt… hope and relief. It wasn’t all in my head. It wasn’t actually me losing my grip on my mind. There actually was something happening that I couldn’t just fix on my own.

And Then I Wondered… Do I Really Have ADHD?

During the weeks of waiting for insurance approval on my medication, doubt set in. Perhaps… perhaps I took the easy route. And if there’s one thing I’ve learned about myself in therapy, I refuse to take the easy path.

Did I go in looking for a diagnosis? Was I seeking a prescription? Did I really try everything I could to handle this on my own? I mean, did I really, really try everything I could think of on my own. The relief I felt when I walked to my car after that appointment slowly turned into guilt because surely a solution couldn’t be that easy. I’m now a statistic. An ADHDR’er. Just another person who can’t pay attention because they aren’t really trying, right?

So I began documenting all the signs that pointed to an ADHD diagnosis:

The Internalized Denial of ADHD Being Real

This is a bit niche, but are you familiar with Dr. James Dobson of Focus on the Family? I grew up listening to his radio show. One of the most poignant episodes I absorbed as a child was the episode about the epidemic of boys being diagnosed with ADHD. The way my undeveloped, soon-to-be ADHD brain, absorbed it was the “epidemic” was a result of poor family structure, parenting, and ultimately, a lack of faith. Without reservation, I can say I do not ascribe to that mindset, but I couldn’t help but think about how this still was in the back of my mind.

I shook off the resurfaced childhood misunderstandings of ADHD. I’d be yelling, clapping, and cheering for any of my friends who felt the relief I did when I got my diagnosis and answers. Why wasn’t I willing to accept the same help I’d encourage others to get? (That’s a question my therapist and I are going to have to discuss.)

The Relief of Getting Help

The first day I took my pill I felt like I was in an EDM club and my heartbeat was the pulsing bass that ran through my veins for far too long. Lucky for me, that is a dream. After 8 hours of focus, I almost cried from relief. It wasn’t this manic episode where I was typing while drinking iced coffee while crossing a million things off my list. In contrast, it was calm. I had focus. Things that had been hard for me to comprehend I was able to think about. I felt… I felt like I was myself.

Why does it take me so long to write about these sorts of life changes? Surely if I was okay with this I’d talk about it as it unfolds. For the same reason(s) I often go through writer’s block, I have to go through it and be ready to talk about it in a way that can offer the glimmer of hope I was searching for when I needed it. Furthermore, confronting my diagnosis and going from zero medication to a controlled substance can be a total world upset both mentally and physically, even when you’re braced for it.

I was able to write this post in one sitting, calm, focused and feeling like the version of me I want to be. And that’s kind of how it’s been going. The hard-to-focus days still happen, even with help, but I don’t have holes in my memory and look back wondering what happened during those periods.

So now you know.

I’m Alissa. I’m a marketer, people leader, writer, dog mom, fitness enthusiast, the list goes on, but now there’s one more title I get to add and explore about myself, neurodivergent.