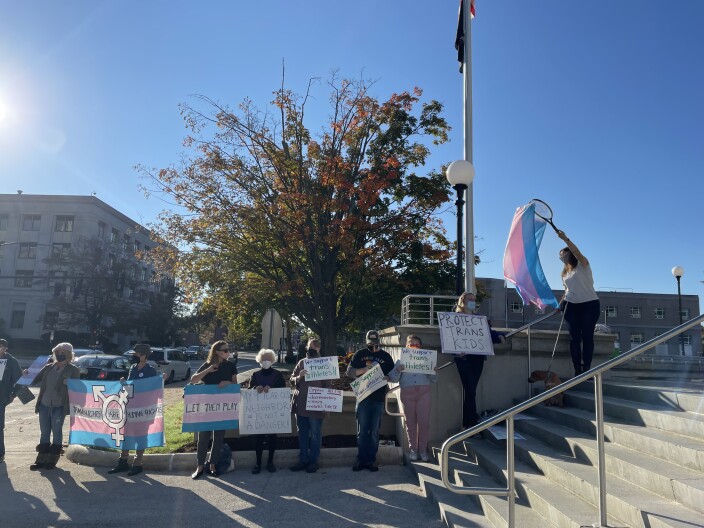 The New Hampshire House of Representatives’ Education Committee voted down two bills Thursday that would have impacted transgender youth in different ways.

One of the bills, HB 198, would have changed state anti-discrimination laws to add an exception allowing for discrimination against transgender athletes in public schools.

The other bill, HB 136, would have required schools to update their documents and software to give non-binary students the option to accurately identify themselves in school records.

House Republican Rick Ladd, the primary sponsor of the bill that would allow discrimination against trans athletes, moved for it to be deemed “inexpedient to legislate.” Legislators voted 20-0 against the bill, which was retained in committee in March.

Ladd said he was still concerned about the issue, but felt that the bill needed work before it was ready to move forward.

A group of advocates for transgender rights demonstrated outside of the Legislative Office Building to call on lawmakers to vote against HB 198, saying that trans students deserve the same rights as their cis peers.

Abi Maxwell was among the demonstrators. She said that her 9-year-old daughter, who is transgender, should have the right to join a sports team.

“My daughter is just as worthy as any other child,” she said. “And the idea that somebody would look into her eyes and tell her that she is not allowed to be on a sports team because of who she comes to the world as, that’s just horrific and disgusting, and you would never do that to a child if you actually met them.”

Palana Hunt-Hawkins, a Rochester city councilor, said that the bill was a regressive step.

“There are hundreds of things that give student athletes advantages over one another: height, weight, private training, there’s all kinds of things,” she said.

Advocacy groups have called 2021 a record-breaking year for anti-transgender legislation, with more than 100 bills introduced across the country that specifically target trans individuals and communities.

In many cases, legislators who have introduced bills specifically dealing with trans athletes are unable to cite instances where the athletes have caused problems. Eric Vilain, a doctor who studies sex differences in athletes, told NPR in March that research doesn’t support the movement to exclude trans women from women’s sports.

Later in the Education Committee session, legislators discussed a bill to require schools to give non-binary students the opportunity to record their gender correctly in school records.

House Democrats motioned to move the bill forward, saying that it was a minor change that would have a big impact for non-binary students and their parents.

Rep. Joshua Query, one of the few out non-binary legislators in the country, said they were in support of the bill.

“I can say that this would be an immensely beneficial thing for non-binary students,” they said. “And if I had this access as a child, it would have allowed me to be open and out earlier on in my life, and would have allowed for a lot less confusion as I went into my adult life.”

Opponents voiced concerns that a new checkbox might impact the medical care students receive, and that an option for taking notes about a child’s identity would be a more appropriate approach.

Supporters said that the bill was in response to constituents’ requests to address the lack of non-binary options on school documents. Rep. Stephen Woodcock, who sponsored the bill, said he was surprised by the vote.

“What I find alarming is why people would vote against something that’s going to provide mental health assistance to children at no cost and no implication, and cis parents who have asked for this,” he said.

Bicyclist From Massachusetts Killed, Another Seriously Injured In Texas Crash