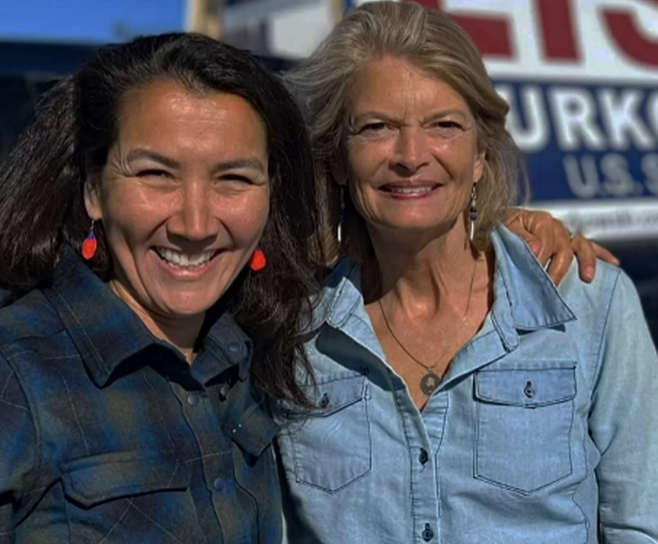 Sen. Lisa Murkowski and Rep. Mary Peltola, who each had the most first-place votes in their contests, cemented their victories Wednesday through ranked choice voting.

Murkowski, abandoned and attacked by the Alaska Republican Party for failing to kiss the ring of Donald Trump, showed once more that she could win by appealing to the majority of Alaskans who see beyond party labels.

While not as dramatic as her difficult 2010 write-in victory over Joe Miller, the win showed that Murkowski’s brand of moderation resonates more with many Alaskans than the strident right-wing zealotry of Kelly Tshibaka, the candidate blessed by Trump.

In its coverage of the final count, the Anchorage Daily News repeated a line it has used many times in recent months: “The race was widely seen as a referendum on Trump and his grip on the Republican Party.”

It’s far more complicated than such shorthand would suggest. Many Alaskans have gotten to know Murkowski over the past two decades and respect her efforts on behalf of the state and nation.

I would say the race was more a repudiation of Tshibaka’s extremism and an endorsement of Murkowski’s judgment and skills at building coalitions. Tens of thousands of Alaskans have had direct interactions with Murkowski and didn’t believe Tshibaka’s lies that Murkowski was a tool of Washington, D.C. The race was all of that and a sign that Trump’s endorsement is worth a lot less than he thinks it is.

Murkowski’s victory means she will “remain a pivotal swing vote in the chamber and to wield significant seniority on the Senate Indian Affairs Committee and the Appropriations Committee, which controls government funding,” as the New York Times put it.

“I am honored that Alaskans — of all regions, backgrounds and party affiliations — have once again granted me their confidence to continue working with them and on their behalf in the U.S. Senate,” Murkowski said in a press release. “I look forward to continuing the important work ahead of us.”

Peltola’s unlikely victory is a product of her own capabilities and of just how unpopular Sarah Palin is with a broad swath of the voting populace in Alaska. Palin’s celebrity makes her popular with about one-quarter of the voters, while three-quarters have long been fed up with her antics.

Peltola said the election means she has a “two-year contract.”

“I will be happy to work for Alaskans again, as long as they’ll have me,” she said.

Both Palin and Tshibaka have taken to blaming the ranked choice system, refusing to admit that they lost because their opponents received more votes than they did.

This is like a hockey player who can’t skate and blames the ice for being too slippery, as Publisher Larry Persily wrote about Palin’s complaints in the Wrangell Sentinel.

If Palin and Tshibaka ran better campaigns and tried to appeal to a wider variety of Alaskans, the results might have been different. The best thing about the new voting system is that it encourages and rewards candidates who build coalitions. That’s true with Murkowski and Peltola.

For the good of Alaska and of our system of government, Tshibaka and Palin should admit that they lost fair and square.

Tshibaka couldn’t quite bring herself to do that with a press release after the results were released.

“It’s clear from the ranked-choice tabulations that Sen. Lisa Murkowski has been reelected and I congratulate her on that,” said Tshibaka.

Then she went on to complain about the evils of ranked choice voting, Mitch McConnell and whine that “the Senate election turned out to be another victory for the Washington, D.C. insiders who rarely have our best interests at heart.”

Earlier this week she was still trying to raise money from right-wing extremists Outside, suggesting court fights ahead. It now appears that she was just raising more money.

Palin and Tshibaka could learn something from Les Gara, who lost the governor’s race to Gov. Mike Dunleavy, about recognizing election results.

“We hope all who have lost by margins that do not require a recount will uphold voter confidence in free and fair democratic elections,” said Gara and running mate Jessica Cook in a prepared statement.

• For a rundown on the legislative races, read Matt Buxton’s report at Midnight Sun. The House is evenly divided or almost evenly divided, which will make it hard to enact major legislative changes. And hard to form a leadership organization.

“Most importantly, Republicans pulled off two key comebacks that would leave the 40-member House evenly split between bipartisan coalition-friendly legislators and everyone else—as long as the one with a 4-vote margin holds through a recount. That race would be South Anchorage’s House District 15 where Democrat Denny Wells fell four votes behind Republican Rep. Tom McKay once third-place Republican David Eibeck was eliminated. A state-funded recount is on the table there because the margin is well within the .5% required by state law,” wrote Buxton.

• “Alaska midterm elections were a win for moderate politics,” writes Jeannette Lee in an analysis at sightline.org. Ranked choice voting may prove to be more popular now that Alaskans see the results.

“But now that Alaska voters have tried it, they may not want to go back. Alaskans had more choice, particularly among statewide candidates. The system ensured that candidates who were popular with general election voters weren’t shut out in partisan primaries. And it’s likely that most Alaskans are genuinely happy about at least one of the statewide candidates, and at least a little annoyed about one of the others. That’s democracy. You win some, but only some,” wrote Lee.

Advocates frustrated with delay in erasure of some criminal records

Endometriosis and the barriers to care

With Biden cautious on new Israeli gov’t, Dems at J Street ready to take gloves off