Millions told to evacuate as Typhoon Nanmadol heads for Japan

“In Kagoshima Prefecture, there is a risk of storms, high waves and storm surges like never experienced before,” the JMA wrote, adding that it could cause a “large-scale disaster.”

Residents in 965,000 households have been ordered to evacuate across the seaside cities of Miyazaki, Kagoshima, and Amakusa.

A level five alert, the highest on Japan’s disaster warning scale, was issued to more than 14,000 people in the city of Nishinoomote on Kyushu island, NHK reported. 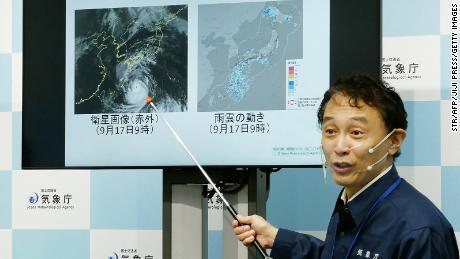 “There is a possibility that it will be record heavy rain and an emergency heavy rain warning will be announced,” said Japan’s Meteorological Agency (JMA).

Nanmadol is the 14th typhoon Japan has experienced this year and is currently forecast to make landfall in Kyushu on Sunday evening.

Ryuta Kurora, a JMA official, warned Saturday strong winds could cause houses to collapse. Kurora urged residents to evacuate before the storm hit to escape the risk of landslides and flooding.

Japan Airlines and All Nippon Airways have already canceled at least 335 flights that were scheduled to depart from or arrive at airports in Japan on Sunday, according to NHK.

“The eye of Typhoon Nanmadol is clearly visible in satellite images. The typhoon has developed rapidly since Friday night,” NHK reported.

The Kyushu Electric power company also reported on Sunday that almost 60,000 households across the island are without electricity.

Fiona washes houses away, knocks out power in Canada

US and Philippines increase military ties over China threat

Fiona washes houses away, knocks out power in Canada

US and Philippines increase military ties over China threat