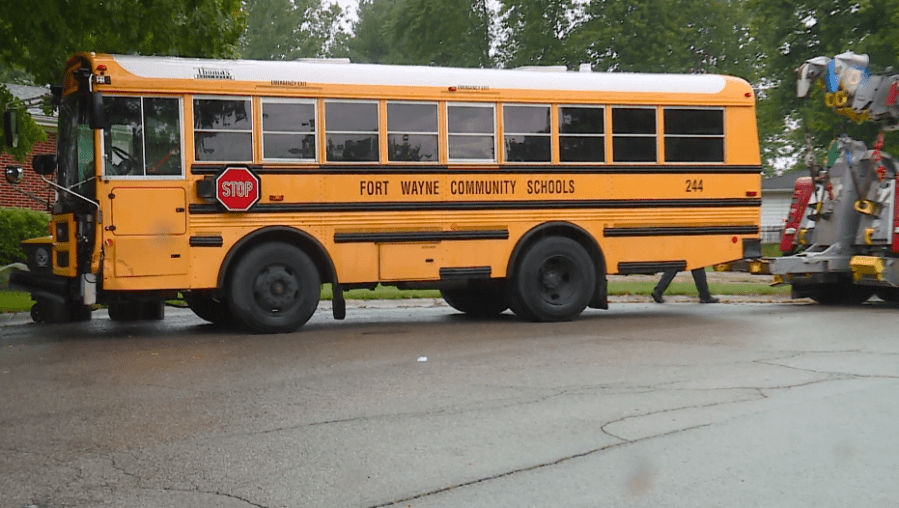 WANE 15 can confirm that at least two of those crashes were not the bus drivers’ fault. The district said the crashes were the result of distracted drivers.

Attorney Phillip Truitt of Truitt Law Offices, who is not involved in any of these incidents, said that is the case many times.


FWCS bus struck when car tries to drive around

“It’s fall and everyone is getting back into school. so they definitely weren’t on the roads all summer and so maybe drivers have kind of forgotten to watch for these large vehicles making these frequent stops,” Truitt said.

Truitt says drivers should be more watchful while behind the wheel.

“It really just has to do with people really not being aware,” Truitt said.

Fort Wayne Police said a bus was rear-ended by a speeding car on Cook Road near Turnstone Boulevard Tuesday morning.

A bus aide and the bus driver were taken to the hospital to be checked out, but there were not any serious injuries.

Thursday morning, near Getz Road and West Jefferson Boulevard, a bus had its caution/yield, yellow flashing lights on when a passenger car attempted to go around the bus but crashed into it.

There were some students on the busses in these incidents.

“There’s not much you can do to make a school bus safer than it already is. It’s 45-feet long, 12-feet tall. It’s yellow and has flashing lights on it, so the school corporations are doing everything they can to keep the kids safe. But, at the end of the day, people are just not looking in front of them,” Truitt said.

“It is unfortunate that we have had accidents involving our school buses two consecutive days. Fortunately, neither crash resulted in serious injuries. These accidents are a reminder, however, that drivers need to be aware when they are behind the wheel. When a school bus is in the area, motorists should be alert to any flashing lights. If the lights are flashing yellow, drivers should slow down and prepare to stop when the lights turn red and the stop arm is out. Vehicles should stay put until the stop arm is turned off and students are safely away from the vehicles,” spokeswoman Krista Stockman said.