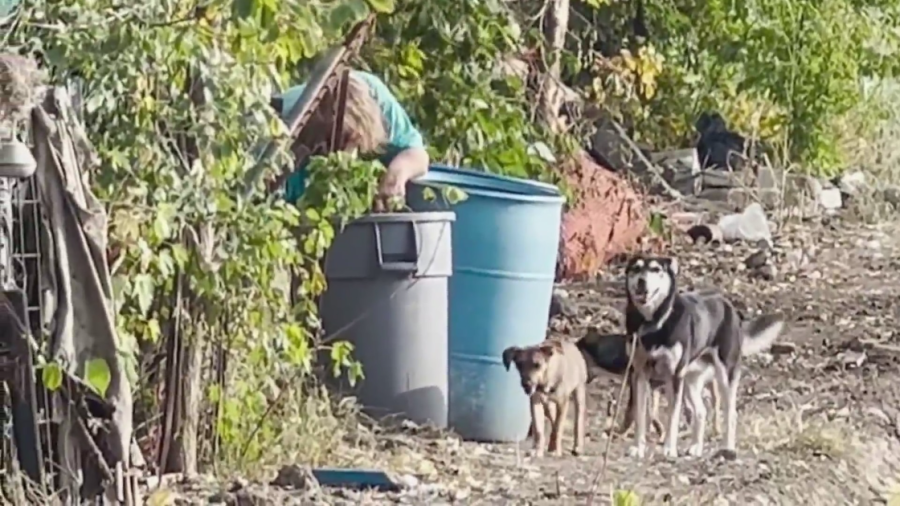 PLEASANT HILL, Mo. — Neighbors complain dozens of dogs are living on a Cass County property that resembles a junkyard outside Pleasant Hill, Missouri.

Those neighbors say they are concerned for the dogs’ health and for the people who use the trail every day that goes right by the trash-filled property.

Cass County investigators say the man who lives on the property with those dogs isn’t breaking any laws. One animal advocate said if that’s the case, the laws need to change.

“Dogs are chained up to everything. I was shocked at the amount of dogs and amount of trash, Michelle Brinkoetter said of her first sight of the property along Katy Trail at Rock Island Spur.

She went up to the man who lives there to ask about what she estimates is around 30 dogs.

When he refused, she first went to the sheriff’s office, then to social media.

“I have people reaching out from France, from Montana, Nevada from Colorado, so there are a lot of people very concerned,” she said.

But Brinkoetter says the Cass County Sheriff’s Office doesn’t seem to be in that group. A Major with the Sheriff’s Office told FOX4 Wednesday nothing in their investigation so far has risen to the standards of seizing any animals.

“I’m being told this is adequate,” Brinkoetter said displaying a photo of murky water filling a plastic infant pool.

“This is not adequate water. This is bacteria and germs and heartworms and mosquitoes,” she said.

Brinkoetter isn’t the first to complain about the property, there have been police reports filed by trail users.

“We have 11 dog bites since 2017,” Brinkoetter said going through the sheriff’s office reports she was able to obtain through a records request.

“They don’t bother me as much as other people. I’ve talked to other people who ride on the highway and come back on the trail at the next road to avoid this right here,” cyclist and K-9 trainer Larry Ramel said during his ride past the property.

But since she and others who protested this weekend took their fight public, she says the county’s response has only been to try to reclaim the road that leads to trail parking from piles of the man’s property that had encroached upon it.

When FOX4 went to the property today to ask about the situation and whether the dogs were being propely cared for, the man surrounded by several dogs just walked away. But Brinkoetter said she can’t do the same.

“It breaks my heart I can’t watch these dogs suffer and I feel like we’re fighting so hard and it’s all falling on deaf ears,” she said.

She and other animal advocates plan to call on Cass County Commissioners at Thursday’s meeting to enact an ordinance that would prevent dogs from being tethered around the clock.

📲 Download the FOX4 News app to stay updated on the go.
📧 Sign up for FOX4 email alerts to have breaking news sent to your inbox.
💻 Find today’s top stories on fox4kc.com for Kansas City and all of Kansas and Missouri.

Typhoon Noru smashes into the Philippines, killing 5 and leaving villages in tatters | CNN

Typhoon Noru smashes into the Philippines, killing 5 and leaving villages in tatters | CNN