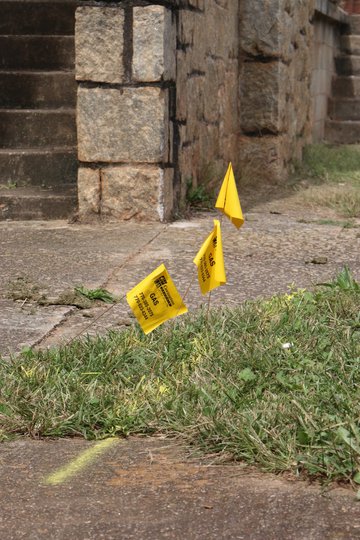 Just two weeks ago, residents heard a proposal for a mixed-use development that would revitalize the historic facility and add 40 apartments to the area. Despite the developer’s intentions to preserve as many historic elements as possible within the development, many residents at the Sept. 28 town hall event were not in favor of the plan and voiced their opposition clearly.

During the same event, city officials were adamant in saying no decisions had been made, and the community’s input would be a driving factor in the property’s future.

After yellow flags marking utility lines were seen at the facility Monday morning, Oct. 11, residents reached out to the The Covington News fearing the worst. Had their input fallen on deaf ears? Was the city moving forward with the proposal?

Covington Community Development Director Trey Sanders told The News that was not the case and assured, again, that no decisions had been made.

“That is just a utility locate,” he said. “There will be plenty of discussion before anything happens there. That’s a promise.”

Special Projects Coordinator Randy Conner confirmed that the utility locate was for an environmental assessment of the building as part of the city’s application process for a Brownfields Cleanup Grant.

Brownfields Cleanup Grants are federal grants “designed to empower states, tribes, communities, and other stakeholders to work together to prevent, assess, safely clean up, and sustainably reuse brownfields.”

According to the U.S. Environmental Protection Agency (EPA), a brownfield is “a property, the expansion, redevelopment, or reuse of which may be complicated by the presence or potential presence of a hazardous substance, pollutant, or contaminant. It is estimated that there are more than 450,000 brownfields in the U.S. Cleaning up and reinvesting in these properties increases local tax bases, facilitates job growth, utilizes existing infrastructure, takes development pressures off of undeveloped, open land and both improves and protects the environment.”

The Covington City Council gave the OK to Economic Development Manager William Smith and his staff to pursue a federal Brownfields Cleanup Grant during a meeting held Sept. 7.

Smith said the Conyers Street Gym was documented at the beginning of the year to be infested with mold, asbestos and lead. In hopes to clean up the property for future use, Smith said he and his staff began looking for opportunities to fund such an endeavor.

“The Brownfields Cleanup Grant came to our attention after the beginning of the new fiscal year,” he told the mayor and council. “We wanted to pursue that so we can prepare that building for future use — whatever that use may be.”

As part of the grant application process, Smith said a requirement for the city was to issue a request for proposal (RFP) for a hazardous materials assessment that would provide the city an estimate for the total clean-up cost. Issuing the RFP would also allow qualified professionals to enter into the building and complete an assessment on “what needs to be removed and how they should be removed, then give us the cost estimate,” Smith said.

The city council approved an RFP on Sept. 7 with Cardno Inc. in the amount of $20,500 to complete the assessment and provide a total cost estimate for the clean-up.

According to the EPA, Brownfields Cleanup Grant applicants can request up to $500,000 to address a brownfield site. Smith said the grant would require a match amount up to $120,000 from the city that the council would have to approve.

If the city were to decide to sell the property, the city could try to recoup some of that money, Smith said.

Another point made by Smith: the EPA requires the city or a “city entity” to maintain ownership throughout the grant process and remediation process.

Conner said assessment work at the facility was on track to be completed Tuesday after test borings around the perimeter are conducted.

Barring hype over ticket sales, India versus Pakistan is just another game for us:...

Zara’s New Campaign Is Great, but Let’s Talk About the Lack of Body Diversity...

Samuel Sage - October 16, 2021 0
I knew what was on the pages of the shopping site, or what the average customer sees: tall, thin women. When Zara's biannual Fall Studio...

Busy North Georgia intersection shut down for 5 hours after dump...