As training camp starts, Kane & Toews are ready to go for the Blackhawks 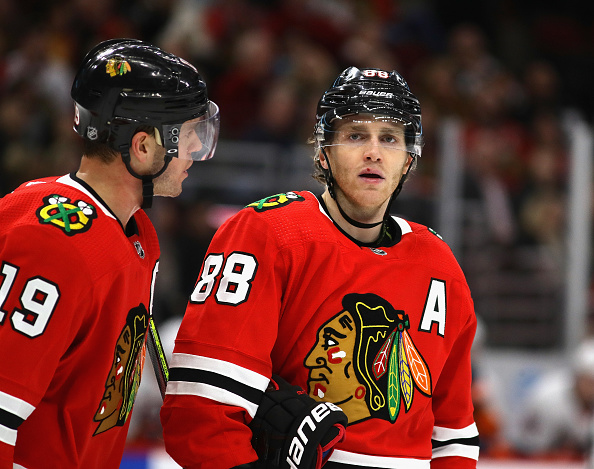 CHICAGO – While almost everything around them is new, from the coaches, players, and expectations, there are two players who link this era of the franchise with the more successful last one.

That’s No. 19 and No. 88, who both stepped onto the ice at Fifth Third Arena for practice on Thursday to begin the first Blackhawks’ training camp under new head coach Luke Richardson.

Perhaps some thought that might not happen for Patrick Kane and Jonathan Toews after a number of players around them left in the offseason or were traded as general manager Kyle Davidson begins a lengthy rebuild of the team.

As other players were shipped out, many wondered if these franchise icons would be dealt ahead of the final year of their contracts.

In the end, there were no deals, and both players will now start out leading this much younger Blackhawks’ squad in 2022-2023.

“We’re focused on Jonathan and Patrick being here, being part of the team and competing right from the opening day,” said Davidson when asked if any teams had called on either player or if there were any talks on a deal. “That’s what we’re focused on and there’s been no discussion on that.”

Safe to say, however, that Davidson has remained in contact with Kane and Toews as a flurry of moves have been made around them over the past few months. One of those is Richardson, who was hired as the Blackhawks’ new head coach in June, and he’s made sure to reach out early and often.

“I’ve talked to them the most and they seem great. I know they probably have some question and some wonder – and that’s all of us, right?,” said Richardson. “I think there’s a lot of new young players coming in and we want to make sure we’re building something and we talk to them about that, and they seem right on page and they want to be a part of this right now at the start.”

Those players will certainly help with a team that comes in looking to develop players that can make key contributions in the future. Typically, that means sacrificing success in the moment, which may be difficult with two players entering their 16th NHL season with three Stanley Cup titles.

As camp begins, however, Richardson has seen both Kane and Toews locked in on the task at hand, and that is to start the building of a new team over the fall, winter, and early spring.

“That’s all we can ask from the players and they look like they’ve come in prepared and are ready and have smiles on their faces. They’re not walking around grumpy and unhappy, but they’re competitive,” said Richardson. “You can understand that they want to be competitive and win, and that’s what we want. So we expressed that we understand that and we like that because that’s going to be the feeling around the dressing room.

“We want the young players to learn off them and learn how to be competitive and win in this league.”

Safe to say they know a little something about that.