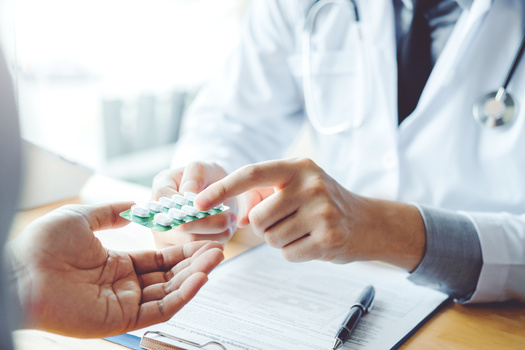 A case involving “Big Pharma” and Community Health Centers serving low-income and uninsured patients began with opening statements this month. At issue is a government drug discount program known as 340B, which requires drugmakers to sell certain medications at lower prices to health centers and hospitals.

Three drugmakers, AstraZeneca, Sanofi, and Novo Nordisk, are suing the federal government for the right to restrict price rebates for drugs dispensed at health centers.

Vacheria Keys, director of regulatory affairs for the National Association of Community Health Centers, said it cuts into the centers’ revenue and ultimately, affects public health.

“As health centers have been losing money, and that translates into losing services for patients, pharmaceutical manufacturers have actually made money over the last few years,” Keys pointed out. “While safety-net providers, like health centers, are passing out their COVID-19 vaccines to the most underserved communities.”

The three drug companies did not immediately reply to requests for comment. Theirs is one of three similar lawsuits. The trade group Pharmaceutical Research and Manufacturers of America has argued the 340B program provides tens of billions of dollars in drug discounts, but does not require health centers or hospitals to prove the money goes to patient care. Health centers countered sharing their financial data would allow drugmakers and health insurers to force them into unfavorable contracts.

Dr. Judd Semingson, CEO of the Community Clinic in Northwest Arkansas, said they serve a large and culturally diverse group of patients, including people from the Marshall Islands who have relocated to the state. He noted until recently, many in the Marshallese community were not eligible for Medicaid, and the 340B program allows his clinic to discount some prescriptions for them, and others in need.

“This is important because this allows many of our patients to get new medications, to get top-of-the-line treatments, when it comes to things like diabetes or lung disease that may otherwise be cost-prohibitive,” Semingson explained.

Health centers reported using the 340B savings to pay for services like dental care, behavioral health, helping patients with copays and in some cases, services like transportation or food. The government recently rejected an administrative complaint by Community Health Centers, so advocates for the centers are asking Congress to step in.


Disclosure: The National Association of Community Health Centers contributes to our fund for reporting on Budget Policy and Priorities, and Health Issues. If you would like to help support news in the public interest, click here.

Maine requires its hospitals to provide medically necessary care to its residents at no charge as a condition of receiving tax-exempt status, but not all eligible patients apply.

Mainers with income up to 150% of the federal poverty level can apply for charity-care funds, but documentation requirements can be tricky for non-English speakers, gig workers and those without reliable internet access.

Kate Ende, policy director at Consumers for Affordable Healthcare, said the funds exist so Mainers can get the health care they need.

“These programs are available to people who are uninsured as well as people who maybe have private insurance but have a really high deductible, or other out-of-pocket costs that are expensive,” Ende explained.

Accessing the charity funds can help people avoid the heavy burden of medical debt, Ende pointed out, adding many people would be surprised to learn they qualify, if they would simply apply.

Four in 10 Americans carry medical debt while one in seven adults say they have delayed hospital services due to cost. Yet, charity funds remain underutilized.

A recent Kaiser Family Foundation study shows half of U.S. hospitals reported the cost of providing charity care made up just 1.4% of their operating expenses.

Ende argued people deserve quality health care, and it is OK to ask for help.

“People are avoiding care, cutting pills in half, or not filling a prescription their doctor has prescribed,” Ende observed. “We know Mainers are going without the care and medications they need because of costs.”

Maine hospitals are required to notify patients of charity-care policies prior to collecting payment, and Ende noted some health care workers, such as anesthesiologists, practice care at hospitals but are not employees and would not be covered under any assistance funds.

Patients can find more information at mainecahc.org or by calling the Consumers for Affordable Healthcare hotline at 1-800-965-7476.


Disclosure: Consumers for Affordable Healthcare contributes to our fund for reporting on Budget Policy & Priorities, and Health Issues. If you would like to help support news in the public interest, click here.

Smoking remains the leading cause of preventable death and disease in the U.S., yet efforts to prevent kids from picking up the habit continue to fall short.

The most recent National Youth Tobacco Survey showed vaping is by far the most popular option for school-age kids with more than 14% of high school students and 3% of middle-school students reporting they vaped at least once over the past 30 days.

Dr. Emily Jacobs, a pediatrician at Franklin Memorial Hospital in Farmington, said most kids pick up the vaping habit from other kids.

“I don’t even think they know why they started,” Jacobs pointed out. “It’s just either boredom or experimenting, and they almost never have a good reason for continuing to vape. It’s often just an addiction.”

Most youths who responded to the survey reported they would like to quit, but withdrawals can exacerbate any depression or anxiety, which may have led them to start vaping in the first place.

The marketing of vapes or e-cigarettes has long been blamed for the increase in teen vaping. E-cigarette maker Juul Labs recently agreed to pay nearly $440 million dollars to settle an investigation into the marketing of its high-nicotine products. But Jacobs noted kids are savvy.

“I have a teen who, on Snapchat, she could find some guy driving around the community with a ton of vapes in his car and Snapchat him her location,” Jacobs observed.

Jacobs added teens are open to talking about vaping and receptive to learning about the risks it poses to their long-term health.

She advised parents to keep an open line of communication to ensure kids feel safe in sharing their experiences. There’s also the 1-800-QUIT-NOW hotline, and teens can also text “Start My Quit” to 36072.

November is Lung Cancer Awareness Month, bringing the spotlight to the country’s deadliest form of cancer. There will be an estimated 130,000 lung cancer deaths
in 2022, including nearly 2,000 in Minnesota, according to the American Cancer Society.

Michael Skokan, a pulmonary critical-care physician at The Oregon Clinic, said many of these deaths are preventable and the first action people can take is to stop smoking.

Skokan said the disease historically has presented some challenges to doctors.

“When you find it at an early stage, you can treat it,” Skokan said. “But over the years, we hadn’t been good at doing that because people don’t really have symptoms, and once they have symptoms it’s usually a later stage and it’s spread and its much, much more difficult to treat and sometimes it’s not treatable.”

Skokan said people who haven’t yet quit and meet certain criteria are able to get screened for the cancer with a C-T scan of their lungs. The scan helps doctors identify early-stage lung cancers, and the tool has been around for about a decade.

COVID-19 has an effect on lung health but no direct link with cancer. However, Skokan said the pandemic did affect treatment, with many people avoiding the doctor’s office.

“People who got other things during that time when everything was really problematic in getting care – that affected a lot of people who didn’t necessarily have COVID but got other things, including lung disease or lung cancer, and couldn’t get treated as timely as we had been able to do in the past,” Skokan said.

While the number of deaths is still high, Skokan noted that it has been going down in recent years for a few reasons.

“Number one, less people smoking. So we’re starting to see the effects of that. And the other thing is that our treatments are getting better,” he said. “So people who present with lung cancer – we now have more options for treatment and people are living longer.”