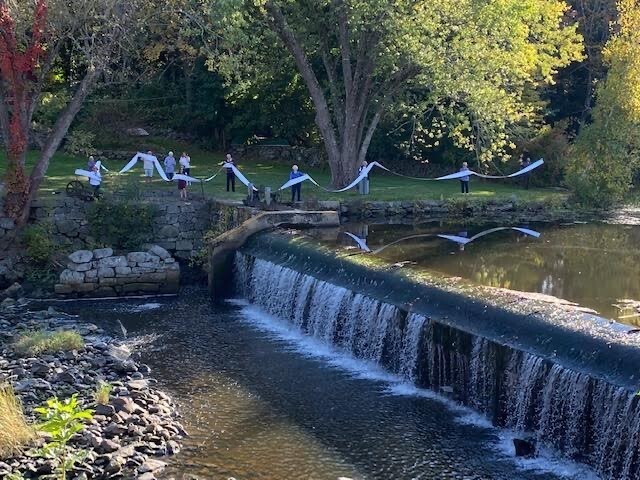 The future of Durham’s historic Mill Pond dam may be brought to a vote after a group supporting the dam’s preservation delivered a petition to the town council on Tuesday.

Get NHPR’s reporting about politics, the pandemic, and other top stories in your inbox — sign up for our newsletter today.

The council voted to remove the dam last month, after more than a decade of debate. The dam is damaged and must either be repaired or removed.

Indigenous leaders and some environmental advocacy groups celebrated the decision to remove the dam, saying that removal could restore the health of the waterway it’s impacting.

Now, a petition to reverse the vote has signatures from 1,001 people.

Andrea Bodo, a member of the Durham Historic District Commission involved in the petition effort, says it’s important to bring the issue to a vote because many community members didn’t agree with the town council’s decision.

“There’s a lot of passion. This is a historically very significant dam, the Mill Pond is a great source of recreation,” Bodo said. “People feel that this movement of taking all the dams down should not apply to Durham.”

The dam is one of the few Ambursen-style dams in New Hampshire.

Bodo also said some community members did not agree with the assessment that the removal of the dam will help resolve the impaired water quality in the Mill Pond and in the Great Bay estuary.

Scot Calitri, a community member who supports the removal of the dam, says he’s concerned the petition is a way to put the decision on people who are less informed than the town council, which has spent years going through research on the dam.

Calitri is part of the Oyster River Conservation Alliance and says that supporters of removal are hoping to support the town’s sustainability efforts.

“We’re looking out for protecting the town from climate change, and we’re trying to look out for the environment and the safety of our pets and our families,” he said.

Todd Selig, Durham’s town manager, said that he’s focused on the decision-making process. He says the town council went through a careful procedure, reviewing detailed scientific and engineering studies prior to voting for dam removal and river restoration, he said. Now, the citizens who feel strongly about the issue are making their voices heard.

“I think both the council and the citizens are doing their jobs,” Selig said.

If at least 750 of the signatures on the petition are certified, the town will hold a special election to determine the path forward for the dam.

If the petition is certified, it will be the first successful referendum petition in Durham since the town charter was adopted in 1987.

Bicyclist From Massachusetts Killed, Another Seriously Injured In Texas Crash

Maine’s Beloved Puffins Suffer One Of Their Worst Years For Reproduction...