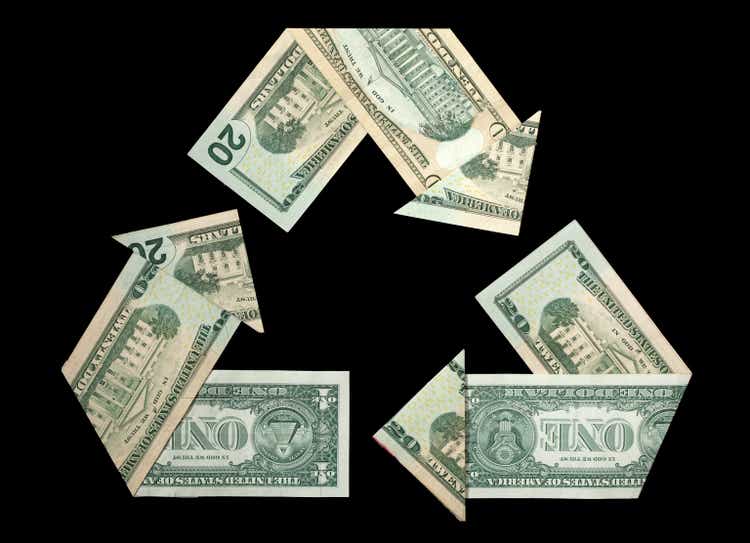 A big beat on Q4 revenue and EPS could help RERE rebound above $3. It is the universal problem of Chinese companies that they do not get enough coverage. I hope that by publishing here at Investing.com, ATRenew gets into the radar of growth-minded investors.

My buy thesis is that ATRenew is on track to sustain its TTM revenue CAGR of 37.75%. In my book, any company that can achieve greater than 20% annual sales growth is a legit growth stock.

This excellent growth performance of ATRenew is likely why four Wall Street analysts rate RERE as a buy. Their average price target for this stock is $11.63. ATRenew stock is currently trading at less than $1.80. The almost 600% upside potential that Wall Street analysts are predicting for RERE is worth betting on.

This Christmas shopping season will most probably boost sales of new and pre-owned smartphones, tablets, laptops, and other electronic gadgets. ATRenew will be collecting and recycling more used gadgets after this Christmas-boosted quarter. I expect Q4 revenue to be higher than $430 million. Going forward, fiscal year 2022’s annual revenue could be as high as $450 million.

Why You Should Go Long

RERE’s stock is down -3.47% on the first day after its Q3 ER. The YTD performance of RERE is now -72.3%. My takeaway is that ATRenew’s stock is already a viable candidate for bottom-fishing growth investors. The huge price decline has made RERE very affordable. You can see from the screenshot below that RERE’s TTM Price/Sales valuation is now only 0.32. This is 61.79% lower than the sector average of 0.85.

The big decline from its 52-week high of $8.29 has also lowered RERE’s TTM Price/Book valuation to just 0.47. This is 77.29% lower than the sector average of 2.06. The significant undervaluation of ATRenew is a buy opportunity. I opine any high-growth company that trades at less than 1x Price/Sales is a bargain.

ATRenew company is helping reduce the bad environmental impact of electronic or e- waste. The e-waste recycling business through barter, swapping, reselling of used gadgets is a $99.67 billion business that is growing at 16.2% CAGR.

ATRenew is a leader in a new business category called recommerce. Instead of governments spending too much money on disposing e-waste products on landfill sites, ATRenew’s commendable core business is to extend the usability of used electronic products.

Please refer to the chart below. From 2019’s revenue of $564.69 million, ATRenew’s expected 2022 revenue is $1.52 billion. The projected 2023 revenue is $2.05 billion. This rapid annual sales growth is your most important metric when evaluating RERE’s investment quality.

Is RERE A Safe Bet?

There is an inherent risk in investing Chinese firms listed in NYSE or NASDAQ. Fortunately, the U.S. government has approved the Holding Foreign Companies Accountable Act or HFCAA. This law requires all foreign-owned companies that are listed in U.S. stock markets to be more transparent in their financial records. Any foreign company in violation of the HFCAA rules could risk getting delisted from NASDAQ or NYSE.

On the other hand, getting delisted from U.S. stock markets is not going to kill ATRenew as a company. It can list itself in Hong Kong or U.K.

I checked. ATRenew is not in the list of 271 Chinese companies that are in danger of being delisted.

As for financial health, RERE’s total cash reserves as of most recent quarter amounted to $320.94 million. This is 10x greater than its total debt of $27.38 million. Short-sellers are not attacking RERE. There’s negligible 1.08% shorted of the total RERE shared floated.

I hope this buy thesis will renew the interest of former bulls for ATRenew. This stock used to trade above $7 twelve months ago. If you have idle cash and you are bold enough to invest in Chinese growth stocks, go long on RERE while it trades below $2. Any growth stock that trades below 1x P/S ratio is a golden bargain. RERE is a GARP stock at 0.32x P/S.

My fearless forecast is that ATRenew can sustain a 3-year revenue CAGR greater than 30%. This is due to the lack of a serious rival inside China’s huge 309 billion yuan ($43.7 billion) market for pre-owned electronic gadgets. We also cannot dismiss the possibility that ATRenew could expand to India, Asia, and Latin America.

My takeaway is that international expansion could accelerate ATRenew’s ascent to profitability. Seeking Alpha Quant expects RERE to have a fiscal 2023 forward non-GAAP P/E valuation of 7.54x. My guesstimate is that ATRenew could finish F2023 with a non-GAAP EPS of $0.30. Multiply that by 7.54, we get $2.26. That is my humble Seeking Alpha Quant AI-infused 12-month price target for RERE.

There’s also the possibility that ATRenew could expand to a recommerce of pre-owned brand-name clothing, jewelries, and other accessories. It is my sublime takeaway that the more than 1,600 ATRenew stores could also eventually buy and sell pre-owned Prada or Louis Vuitton products.

ATRenew can easily tap that $29.13 billion industry for pre-owned luxury goods. This expansion market is something that ATRenew should learn from this thesis.

InMode: This Is Why We Were Wrong And Short-Sighted