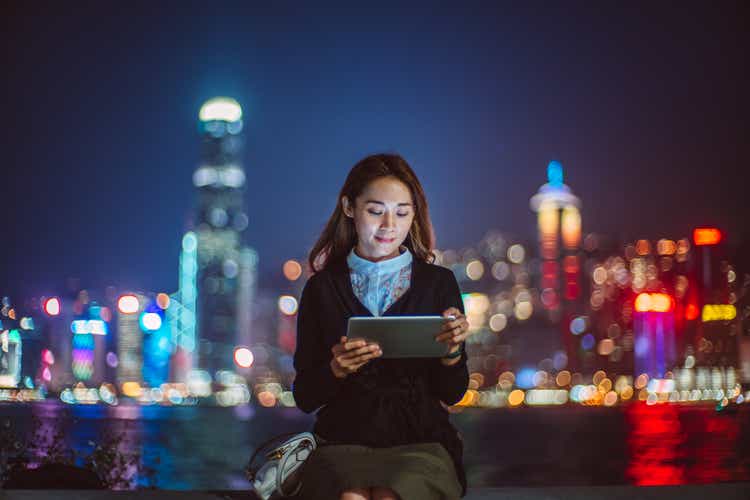 The decline in Invesco China Technology ETF (NYSEARCA:CQQQ) as seen in the blue chart below since mid-2021 has been quite dramatic. It lost over 75% of its value between July 2021 and March 2022. Moreover, unlike the Invesco Technology ETF (QQQ), composed of Nasdaq stocks that have been impacted mostly due to the tightening of monetary policy by the U.S. central bank, CQQQ’s downside is also due to strong regulatory tightening in China. Covid lockdowns also are playing their part.

In this respect, with the large differential in performance between QQQ in orange and CQQQ of nearly 18% in the chart below, investors seem to have already priced in all the negativity, thereby prompting some Wall Street analysts to turn bullish on Chinese stocks.

As a result, more money seems to be flowing into China tech, which has outperformed the Nasdaq in the last month by about 7%.

Thus, in light of the undervaluation of Chinese equities and major developments centered around geopolitics and Covid lockdowns, the objective of this thesis is to assess whether it is now time to invest in Chinese tech.

I start by providing some insights as to how the high-level talks between the U.S. and China could help CQQQ’s holdings.

The Positive Effect of U.S.-China Talks

The first face-to-face meeting between the American and Chinese presidents in more than five years happened in Indonesia on the sidelines of the G20 summit, with the two leaders choosing a “pause” in the recent spat of rising geopolitical tensions between the two countries.

For investors with money at work in China, this was a welcome sign, especially after that summer of heightened tensions fueled by the spectacular visit to Taiwan by the Democratic speaker of the House of Representatives, Nancy Pelosi. Subsequently, there were Chinese reprisals, in the form of excessive military activity in the strait which separates the island from China.

Pursuing on a cautionary note, it was more a temporary “defreeze” than a full-fledged agreement, as both parties reaffirmed their positions and tried to avoid any unnecessarily belligerent rhetoric.

Talking investments, this breeds cautious optimism for information technology, which comprises 46% of CQQQ’s assets as shown in the chart below. For investors, the IT sector consists of semiconductor companies and vertically integrated industries that depend on them like electronics, server equipment, software, etc.

Explaining the reason for my optimism, there are Taiwan-based companies on which many of the world’s top chip producers like Qualcomm (NASDAQ:QCOM), NVIDIA (NASDAQ:NVDA), and Advanced Micro Devices (NASDAQ:AMD) rely for manufacturing purposes. One of these is the world’s largest contract manufacturer of chips, Taiwan Semiconductor Company (TSM), which also manufactures components for some of China’s internet giants like Tencent (OTCPK:TCEHY) and Baidu (BIDU). These two form part of the communications services sector as listed in CQQQ’s holdings table below.

Now, these companies also depend on advanced GPU chips produced by NVDA or AMD for the AI portion of their massive cloud infrastructures, and any improvement of U.S-China ties could pave the way for the relaxation of export restrictions that the American government has imposed recently. In this way, they can grow their intelligent clouds by developing services based on AI.

However, coming back to reality, for many investors, it has been hard to digest the apparently-unplanned measures imposed on the tech sector from 2020 till early this year which caused a $1.5 trillion loss in the value of Chinese tech equities. Along the same lines, for an investment community that is used to the Security and Exchange Commission patiently drafting rules and big tech leaders appearing before the U.S. Congress to testify on anti-trust grounds, the actions by the Chinese government were so drastic that they were effectively a crackdown on tech stocks.

Results of the Chinese Crackdown and Uncertainty

A look at the post-crackdown policies, especially at items like data protection and cybersecurity, reveals that there are some benefits for Chinese consumers in general. Looking further, important measures encompassing antitrust or anti-competitive practices are also useful to prevent big companies from stifling smaller competitors. In fact, the policies had the effect of encouraging China’s tech giants to diversify abroad or expand into new industry verticals, namely advanced semiconductors, or more foundational technologies.

Thinking aloud about the timing of the crackdown, which happened after the Trump administration enforced export rules from 2017 to 2020 to bar Chinese telecom equipment maker Huawei from obtaining microprocessors, tends to support the thesis that the authorities in China wanted their tech giants to invest in more foundational technologies.

Furthermore, after witnessing the crypto exchange FTX saga where many investors have lost money, one can now appreciate how curtailing investment in cryptocurrency has been helpful.

However, the impact of all these regulatory changes on the finances of the afflicted companies was not clear up until recently, when Tencent, which has a strong presence in the cloud, gaming, and social media businesses, announced a further decline in its third quarter 2022 revenues, by 1.6% year-over-year. On the other hand, Baidu, an Internet search service that has diversified across many industry verticals including driverless cars, fared better and delivered a revenue growth of 2% YoY.

Still, compare these performances to Alphabet (NASDAQ:GOOG, GOOGL) and Microsoft (NASDAQ:MSFT), which, despite suffering from dollar headwinds, still managed to deliver 6% and 24% YoY growths, respectively, in their latest reported quarters. The comparison is pictured below and essentially shows that Chinese regulatory restrictions on the Internet, video games, and social media is taking their toll.

Thus, after many quarters of explosive growth in one of the most dynamic markets in the world, Internet companies in China are now under pressure. This is likely to continue, as, despite the authorities having signaled their willingness to ease Covid restrictions, infection rates continue to rise. Now, as observed elsewhere in the world, reopening and rising infection rates are not compatible. This means that economic activities will continue to be disrupted, bringing uncertainty as to growth perspectives for 2023.

On the other hand, industrial output in the third quarter of 2022 increased by 6.3%, or more than 1.5 % from what analysts were expecting. This was driven by favorable policies, namely for the auto sector. However, as seen in the above sector-breakdown chart, the ETF has little exposure to industrials.

Besides, CQQQ has 15% exposure to Consumer Discretionary through Meituan (OTCPK:MPNGY) and others as shown in the table below. Here, there are also issues, as after three years of lockdowns involving dramatic disruptions in supply chains and the way business is conducted, domestic consumption figures remain weak.

This means lower internal demand, while at the same time central banks throughout the world hiking interest rates to combat inflation should put a lid on foreign (external) appetite for Chinese goods. Furthermore, there may be a brief pickup in activities as lockdown measures are lifted, as people need to work. However, with high lingering Covid infection rates, people may end up prioritizing health, staying at home instead of traveling, and just doing the minimum in terms of business.

Thus, despite CQQQ’s 18% underperformance relative to the Nasdaq during the last three years, the ETF is not a buy. Also, with Chinese foundries importing less chipmaking equipment from the U.S. due to export restrictions, they should, in turn, produce fewer chips, at least until there is a concrete change in U.S. policy in this area.

Now, with chips constituting the basic building blocks for servers in data centers on which business software run, this again throws doubts on the entire IT sector’s growth perspectives.

On a positive note this time, and as I mentioned above, with China’s giant tech aggressively investing in the production of chips since last year and the large talent pool of capable engineers available in the country, they may end up developing sophisticated chips which can subsequently drive growth in IT. Also, even with the strong anti-China rhetoric prevailing after the mid-term elections, any relaxation of export controls would be a positive for CQQQ.

This said, with CQQQ’s underlying holdings totaling 130 and an expense ratio of 0.7%, the ETF is an alternative to having to do research on individual stocks. It holds both Hong Kong and U.S.-listed Chinese stocks. However, this is not the moment to invest, as the two main sectors consisting of IT and Communication Services should continue to be under pressure in 2023.

Finally, CQQQ outperforming the Nasdaq during the last month should not be sustained in the long term. China may not be facing high inflation or monetary tightening like in the U.S, but it has more significant problems pertaining to the lingering effects of the crackdown, restrictions which undermine the capacity of its semiconductor industry to produced advanced chips, while not forgetting Covid.