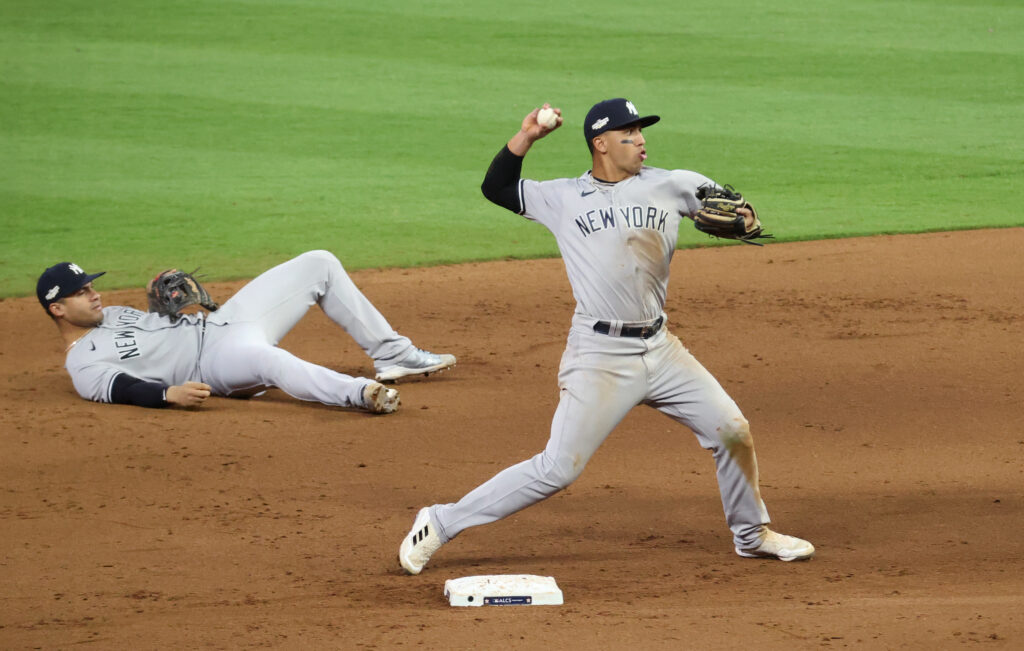 The Yankees shortstop position has been in a state of flux for over a year now. In September of 2021, manager Aaron Boone announced that Gleyber Torres would be moved over to second base. With that new vacancy, many expected the Yankees to acquire one of the five shortstops at the top of last year’s free agent class: Carlos Correa, Corey Seager, Javier Baez, Trevor Story and Marcus Semien.

However, as the offseason got underway, reports emerged that the club wasn’t planning to focus its resources on the shortstop position. They had enough confidence in their young prospects Anthony Volpe and Oswald Peraza they didn’t feel the need to hand out a lengthy contract to fill the position. Instead, they traded for Isiah Kiner-Falefa, a glove-first player who had two years of relatively cheap control remaining.

Things went roughly according to plan in 2022, as Kiner-Falefa continued to hit at a below-average level but produced generally solid work with the glove. His .261/.314/.327 batting line amounted to a wRC+ of 85, with all those numbers fairly close to his career marks. He made some defensive miscues in the postseason, but Defensive Runs Saved gave him a +10 in the regular season, tied for sixth among MLB shortstops for the year. Ultimate Zone Rating and Outs Above Average were less enthused but still had him around league average. He’ll turn 28 in March.

One year later, it seems the long-term plan has not changed. There’s another crop of excellent shortstops this year, with Correa returning to the open market alongside Trea Turner, Xander Bogaerts and Dansby Swanson. But recent reporting still points to the Yankees having enough faith in their internal options to dedicate their offseason efforts elsewhere. The question that needs to be resolved now is exactly how strong that faith is. Is it time to hand the keys over to the kids or not?

One year ago, Peraza had just eight games of Triple-A experience under his belt. He was sent back to that level to start the 2022 season and eventually got into 99 games. In that time, he hit 19 home runs and stole 33 bases. His batting line was .259/.329/.448 for a wRC+ of 106. He was promoted to the majors late in the season and got into 18 games there. He only went deep once but hit at a .306/.404/.429 level in that small sample for a wRC+ of 146. His batting average on balls in play was .302 in the minors but jumped to .359 in the majors, meaning those improved results seem unsustainable, but it’s encouraging nonetheless. He’ll turn 23 in June.

With those youngsters being at or near the majors, it’s possible the Yankees don’t feel they need Kiner-Falefa anymore. They did just avoid arbitration with him by giving him a $6MM contract, but they could work out a trade if they feel secure enough in the other options. However, they could also keep IKF around just in case there’s any growing pains with the younger players, eventually sliding him into a utility role over time. Aside from Torres, the other infielders currently on the roster are on the older side, as Josh Donaldson is turning 37 next month while Anthony Rizzo and DJ LeMahieu will turn 34 and 35, respectively, during the next season. Regardless of who gets the starting shortstop job, the club will likely want to keep some depth on hand in case any of these players deal with injuries or underperformance, as they all did in 2022.

It’s likely that the job will be awarded based on meritocracy. Whoever plays the best in the spring and then into the regular season will continue to get the playing time. The others can be moved to utility/bench roles, spend more time in the minors or end up traded to another club. It does seem like the plan is likely to work out, as they just need one of these options to take the reins. By not dedicating a nine-figure contract to a shortstop, they will be able to use their financial resources to attempt to retain Aaron Judge and/or pursue other marquee free agents as they look to repeat at AL East champions in 2023.

But who do you think will charge forward as the everyday shortstop in 2023? Cabrera has the most MLB experience at this point but he comes with less prospect pedigree and seems easily capable of moving to other positions. Peraza seems to have little left to prove in the minors but he’s only played 18 MLB games. Volpe only just reached Triple-A but could burst onto the scene next year. Kiner-Falefa is still around if no one else takes the job. So, who will play the most games at shortstop for the Yankees in 2023? Have your say in the poll below.