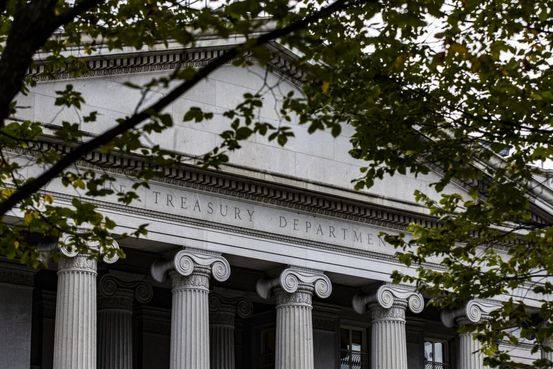 The U.S. budget deficit reached $2.8 trillion in the fiscal year that ended Sept. 30, below the record set the previous year, as government spending tied to the coronavirus pandemic was partly offset by surging revenues.

The deficit was the second-largest on record since 1945 as a share of the nation’s gross domestic product and trailed only the prior fiscal year’s $3.1 trillion shortfall, when not adjusting for inflation.

In reporting the figures Friday, the Treasury Department and Office of Management and Budget said outlays for the fiscal year still rose 4% from the previous year.

called the new data “further evidence that America’s economy is in the midst of a recovery.”

As a share of the economy as a whole, the deficit for the fiscal year was 12.4% of gross domestic product, down from 15% the previous year.

Federal revenue during the year increased 18% from the 2020 fiscal year to just more than $4 trillion, largely due to higher receipts from individual and corporate income taxes that outpaced official projections.

The government’s spending surge helped propel a rapid recovery from the pandemic-induced economic slump, but also helped send the federal debt—as a proportion of the economy—soaring to levels not seen since the end of World War II.

Both Republicans and some key centrist Democrats have said the government shouldn’t spend too much right now, a top reason why President Biden’s $3.5 trillion legislative agenda to expand the social safety net and boost green energy is expected to significantly shrink in size. Democrats have also debated how much the package should be offset by new revenue versus deficit spending; Mr. Biden has said it won’t increase projected deficits.

The nation’s debt has been marching upward since the fiscal crisis at the end of George W. Bush’s administration and the start of

also ushered in spending programs and tax cuts that widened the gap sharply even before the coronavirus crisis.

Budget deficits typically widen during economic downturns, but they have been climbing in the U.S. for the past six years, despite strong economic growth during much of that period. Interest rates have remained historically low, so the government’s costs to finance that borrowing has been constrained.

Earlier this month, Congress and Mr. Biden approved raising the U.S. borrowing limit by enough to pay the government’s bills into early December, setting up a fresh battle in the coming months. Raising the debt ceiling doesn’t authorize new spending, but it does allow the government to meet existing obligations.

If Congress doesn’t raise the debt ceiling later this year, the government would have to suspend payments to beneficiaries or delay interest payments, which would constitute a government default.

Here’s what the Black Friday carnage may mean for the stock market’s trade Monday, analysts say

The anti-Cathie Wood ETF has landed. Here’s how it’s doing so...