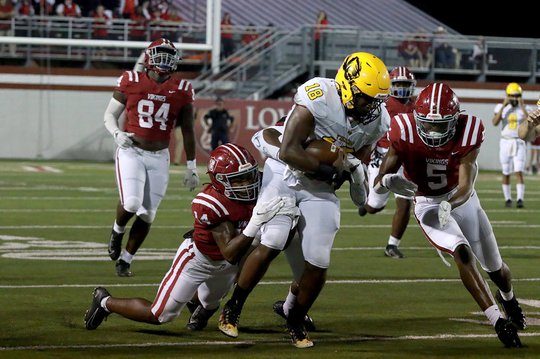 [Editor’s Note: To preview this week’s football games, Sports Editor, Phillip B. Hubbard introduces a brand new series called “Phil’s Pregame Points.” For each game, he briefly breaks down what he believes each team needs to do to better their chances at a win.]

– Last week at Colquitt, the Tigers opened up to a 18-7 advantage during the first half. After that, Alcovy didn’t score another point as it lost 55-18. If they can build off that magic that propelled the Tigers to an early lead, they can be in the thick of things toward the end of Friday’s contest.

– Alcovy won two games last year, one of which was against Grovetown. When these two teams met, the Tigers won easily 44-14. Now, obviously, both teams have changed in multiple ways since last year. But the Tigers seem to be improving by each passing week since last year’s matchup. So, the Tigers may be inclined to use the tape from last year to help in their game preparations.

– The past two weeks, Alcovy has traveled a total of 738.8 miles to go and play on Friday. That, I’m sure, weighs on a team and their preparation for the game. Fortunately, the Tigers are home playing at Sharp Stadium. Interestingly, Friday will also be the first true home game Alcovy has had all season. They faced Eastside at Sharp Stadium on Sept. 10, but the Eagles were technically the ‘home team.’ Alcovy should be energized by this fact alone and use this energy to their advantage.

– Last year, Newton welcomed Brookwood to its house and defeated the Broncos to snap a three-game losing streak against its region foe. This year, the Rams will be going into Brookwood with the Broncos wanting to avenge that loss. So, the Rams need to come out with some extra intensity anticipating the Broncos will have revenge on their mind.

– In two games this season, Newton has held a double digit lead over its opponent. Then, when the Rams start shooting themselves in the foot with turnovers and penalties, opponents start slowly getting back into contention. For instance, the Rams led Parkview in their latest matchup 27-14 with 3:44 left in the third quarter. In the early part of the fourth quarter, the Rams turned the ball over on back-to-back drives. Then, clinging to a 27-24 lead, the Rams’ defense committed three penalties on the potential game-winning drive for Parkview. If the Rams can clean up those mistakes, they should be able to go on the road and win a crucial region game.

– Both teams are coming off a bye week ultimately placing them on even playing ground. Newton, however, is used to playing after a bye week this season. The Rams have had three weeks off (two regularly scheduled and one due to a cancellation.) Coming off a bye week, the Rams are 2-0 and they’ve outscored their opponents 66-28. Friday will be another test to see if the Rams can improve to 3-0 when coming a bye week.

Eastside and Social Circle have BYEs.