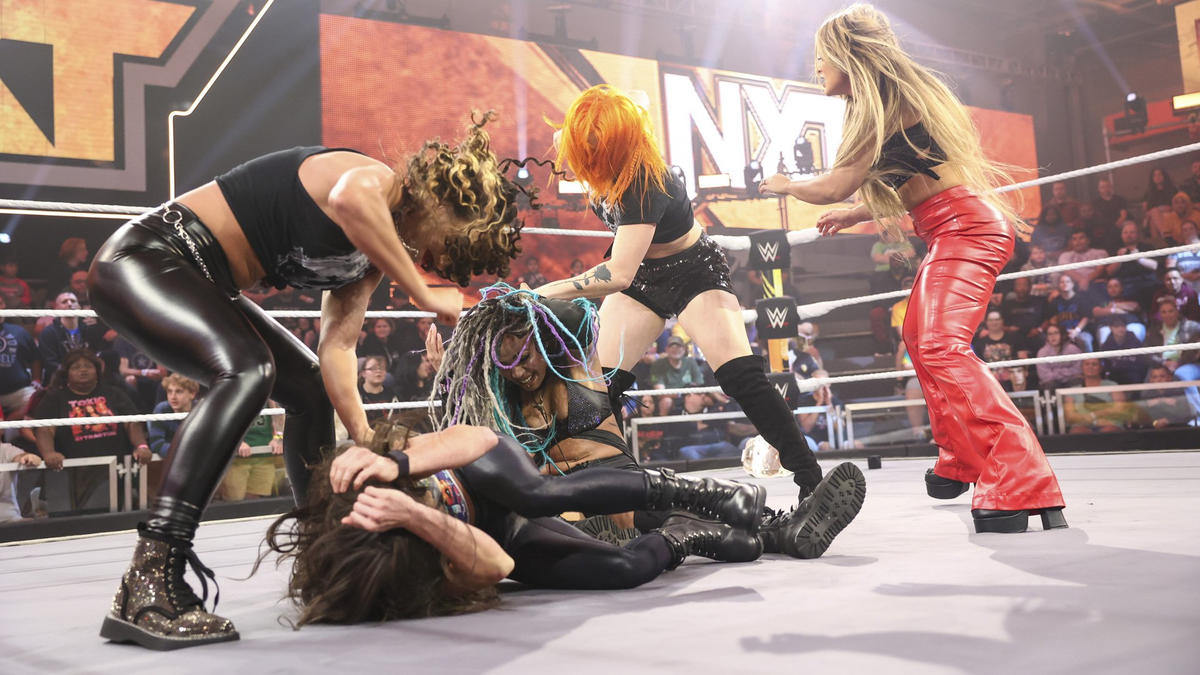 After being the Last Woman Standing and successfully defending her NXT Championship last week against Alba Fyre, Mandy Rose and the rest of Toxic Attraction took to the ring to brag about their stranglehold on the NXT women’s division. Gigi Dolin & Jacy Jayne called out the NXT Tag Team Champions Kayden Carter & Katana Chance, which prompted the champs to come out and confront the trio. The numbers game reared its ugly head and Toxic Attraction beat down the champions to send a message.

Weeks of insults lit a fire under Wendy Choo, as she took the action to Core Jade early in their grudge match. Jade used Choo’s aggressiveness to her advantage, as she used a strategic counter to gain the upper hand. Choo rallied, using her signature sleepy offense to disorient Jade, but a distraction allowed Jade an opportunity to throw Choo’s drink in her face and hit her with a devastating DDT for the win.

Representing Diamond Mine, Ivy Nile immediately took control against Kiana James, utilizing her athleticism and her pure power. James responded with her own display of strength, and the two would trade impressive blows. James attempted to abandon the match entirely, but Fallon Henley appeared and forced James back into the ring and right into a final submission from Nile.

The mysterious Scrypts made his NXT debut after weeks of messages to the NXT Universe. His explosive and high-flying offense proved too much for Guru Raaj as a 360 senton delivered Scrypts the quick and decisive victory in his debut.

Sol Ruca became the first person to challenge Zoey Stark after she called out the entire NXT Women’s division and told them she would hunt them all. Ruca used her athleticism early on, but the veteran Stark became more and more relentless with her attacks as the match progressed. Ruca’s comeback fell short as her attempted top rope attack didn’t land, and Stark landed the finishing blow in the form of a brutal knee to the jaw. After the match, Nikkita Lyons fired back at Stark causing her to leave the ring altogether.

Duke Hudson and his Chase U classmates goaded Pretty Deadly into an NXT Tag Team Title match, and the challengers had the advantage early on thanks to Hudson’s fire and the cheering of the student section in the crowd. Elton Prince & Kit Wilson took control and worked over Andre Chase, and Wilson’s inadvertent knockdown of Thea Hail caused Hudson to miss Chase’s tag attempt. When Hudson finally got into the ring and gained the momentum, he mistakenly hit Chase with a running boot, allowing Pretty Deadly to isolate Hudson and pin him after a Spilt Milk.

In his first defense of the NXT North American Championship, Wes Lee came out on fire, lighting the challenger up with his quick-strike offense. However, a double pump knocked both men down into a double pin, forcing both of them to kick out. The two competitors traded blows until the champion Lee regained control after a pair of big moves that planted Hayes. Trick Williams appeared ringside to help Hayes, but Lee took him out with a flying move over the top rope. The distraction allowed Hayes enough time to recover, but Lee’s grit and heart persevered and he was able to defeat Hayes with a michinoku driver.

After the match, Lee was attacked by Dijak, who planted the champion with a backbreaker into a knee lift.