Factbox-Strikes, protests in Europe over cost of living and pay By Reuters 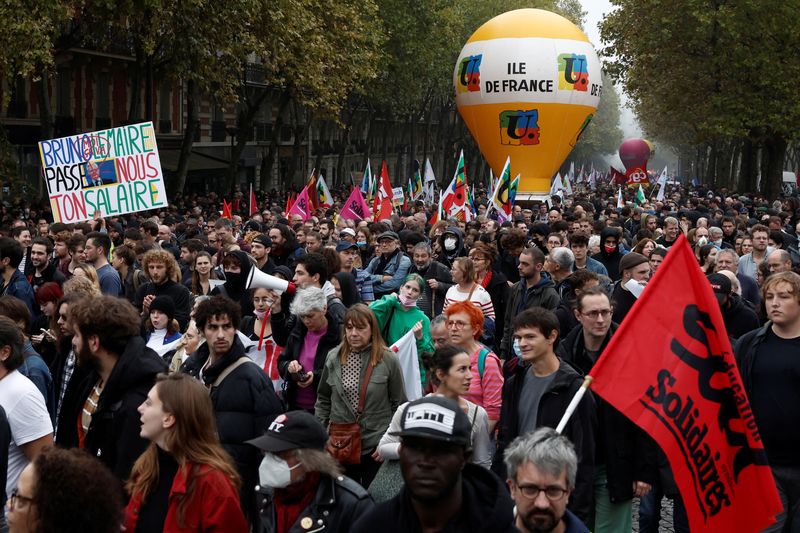 © Reuters. FILE PHOTO: Protestors attend a demonstration in Paris as part of a nationwide day of strike and protests for higher wages and against requisitions at refineries in France, October 18, 2022. The sogan reads “Bruno Le Maire, give us your salary”. REUTERS/B

(Reuters) – European countries face strikes and protests due to high energy prices and a wider rise in living costs. Here are details of some of the industrial action and demonstrations.

* Some 400 fast-food delivery staff employed by Tesco-owned Best Food Logistics have voted to strike over pay, the GMB union said on Thursday.

* Postal workers began a two-day walkout on Thursday and a six-day strike in the run-up to Christmas looked set to go ahead after the Communication Workers Union rejected a pay offer from Royal Mail (LON:) on Nov. 23.

* More than 70,000 staff at British universities and teachers in Scotland walked out on Thursday to demand better pay.

* Thousands of British railway workers will stage further strikes over the next two months in a long-running dispute over pay, the RMT union said on Nov. 22, signalling travel disruption before and after the Christmas holiday period.

* Hundreds of workers at British security company G4S (CSE:) have voted to strike for 48 hours in early December in a dispute over pay, trade union GMB said on Nov. 22, warning the walk out could cause cash shortages over Christmas.

* Exxon Mobil (NYSE:) said on Nov. 21 its 390,000 barrel per day (bpd) Fawley oil refinery in southern England was unaffected by strike action. GMB Union workers had voted to strike on Nov. 21 to Dec 2. over pay.

* Thousands of British civil servants plan one month of “sustained industrial action” through the winter in an ongoing pay dispute, the Public and Commercial Services union said on Nov. 18, after the biggest strike vote in its history.

* Tesco (OTC:), one of Britain’s largest private-sector employers, is offering its staff advances on their pay in the latest sign of the distress arising from a worsening cost-of-living crisis. Some 280,000 of the supermarket chain’s workers will be able to receive up to 25% of their contractual pay early if they pay a small fee.

* Trade union Unite said more than 700 workers at Bakkavor’s food manufacturing factory in Lincolnshire will strike from late November until the new year over pay, which the union said would hit Christmas food supplies to supermarkets Sainsbury, Tesco and Marks and Spencer (LON:).

* Pay awards by British employers held at a 30-year high of 4% in the three months to October, well below annual inflation of more than 11%, data from human resources company XpertHR showed.

* Volkswagen (ETR:) agreed on Nov. 23 a two-year wage deal for around 125,000 workers at its western German factories, offering around 8.5% more pay – below inflation but more than other employers have yielded in recent weeks.

* Lufthansa and the UFO union have reached a pay agreement for 19,000 cabin crew members, the German airline said.

* BP (NYSE:) said on Nov. 22 that the planned restart of its large refinery in Rotterdam after it was closed due to a technical problem was on hold after unions said they would not help with the return to service due to a pay dispute.

* The UNAC and SNGAF trade unions said they were calling for strike action over work conditions at Air France during the Christmas holidays from Dec. 22 to Jan. 2.

* France’s EDF (EPA:) said on Oct. 27 it had formally signed a wage agreement for its workers in the country with all unions present at the company.

* A union group representing shop assistants at fashion retailer Zara has called a two-day strike over pay during the “Black Friday” sales on Nov. 24 and Nov. 25 in stores in the company’s home town of A Coruna in northern Spain.

* Insurer Mapfre will pay a one-time 400 euro ($417.32) bonus at Christmas to its approximately 10,000 employees in Spain to help them cope with soaring inflation. The company provided a 350 euro bonus in July.

* Thousands of Spaniards packed Madrid’s landmark Plaza Mayor square on Nov. 3 to demand higher pay, in the country’s first mass protest since the start of the cost of living crisis.

* Thousands of Portugal’s doctors, nurses, teachers and civil servants walked off the job on Nov. 18 to demand wage increases amid rampant inflation.

Austrian metal workers secured on Nov. 4 an average annual pay rise of over 7%, above the 6.3% inflation rate for the negotiating period, which may be a bellwether for other sectors.