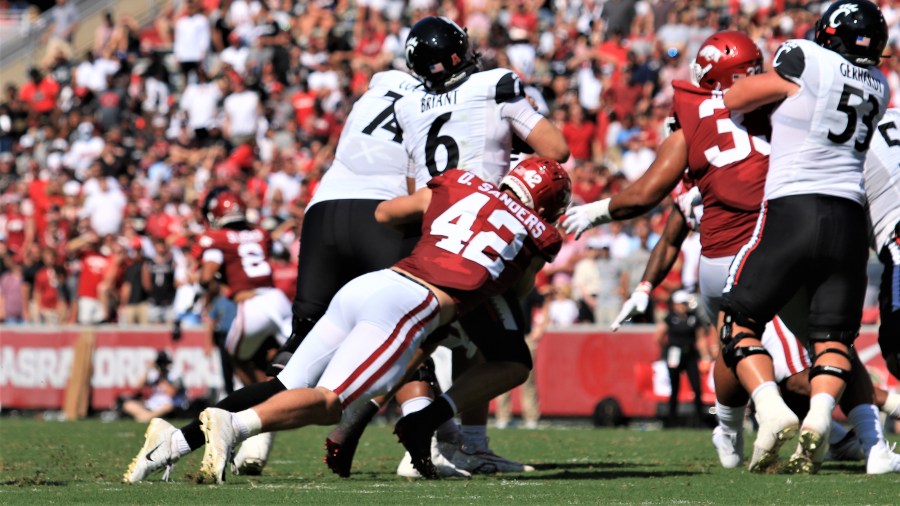 FAYETTEVILLE — Arkansas linebacker Drew Sanders has been ranked the No. 14-overall prospect for the 2023 NFL Draft by ESPN’s Mel Kiper Jr.

Kiper also ranked Sanders the No. 1 inside linebacker. In three games, Sanders is second on team in tackles to Bumper Pool with 27. He has 16 solo, six for loss, five sacks, two pass breakups, one quarterback hurry and a pair of forced fumbles.

Sanders came to Arkansas at midterm from Alabama. The former five-star recruit from Denton (Texas) Ryan played two years with the Tide. He played in 25 games with three starts. Sanders had 33 tackles, 16 solo, 2.5 for loss, a sack, five quarterback hurries and two pass breakups.

“Sanders, a rotational player on the Alabama defense in 2020 and 2021, transferred to Arkansas earlier this year and has been tremendous through three games. He already has 5.5 sacks and two forced fumbles, along with 32 total tackles. He’s playing all over the field for the Razorbacks, showing off his burst and range to chase down ball carriers. He’s a hit, lift and drive tackler who can fill a hole in the run game. He plays super hard and has great size for the position. Sanders’ sack production likely will level off a bit, but I’ve been very impressed with him so far.”

Kiper also ranks Ricky Stromberg the No. 7 center and safety Jalen Catalon the No. 10 safety. Stromberg is a four-year starter for the Hogs while Catalon was injured against Cincinnati and is out for the season. Despite that Kiper left Catalon in his rankings.