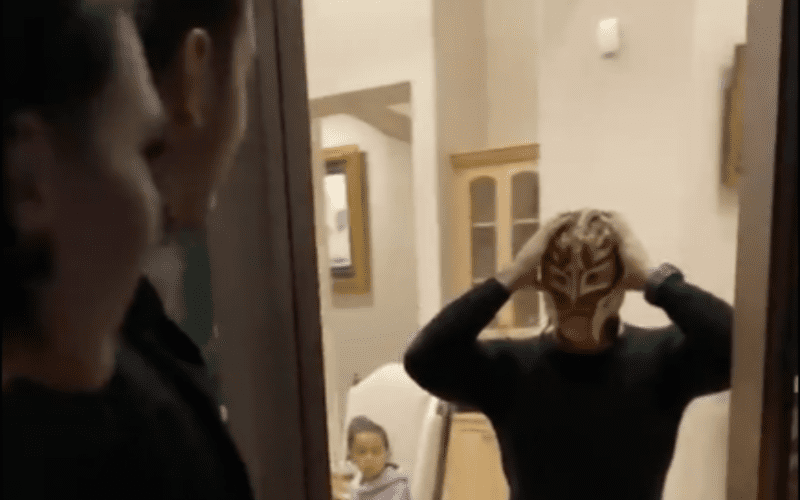 Dominik Mysterio was tired of living under Rey Mysterio’s shadow and turned on him at Clash of the Castle premium live event on September 3, 2022. Dominik Mysterio and Rhea Ripley decided to take things to the extreme on Thanksgiving.

WWE posted a video of Dominik and Rhea Ripley paying a visit to The Mysterios on Thanksgiving. In the clip, Dom and Rhea can be seen have a chat with Rey, who’s reluctant to let them in for obvious reasons.

As soon as Rey closes the door, Rhea Ripley barges in and that distraction allows Dominik to throw down a couple of punches on his fallen father. The two then proceed to destroy Rey’s already injured foot.

Rey was seen wearing a walking boot in the video. Ringside News exclusively reported that Rey Mysterio is dealing with a short-term injury and that’s the reason he was pulled from the SmackDown World Cup.

Check out the full video here:

What’s your take on this story? Sound off in the comments!

Manik Aftab is a news writer at Ringside News. He has been an avid fan of professional wrestling since 2000. His earliest memories of pro wrestling involved The Rock taking on The McMahon-Helmsley faction in 2000.

Outside of his writing responsibilities, Manik is a fan of fiction, thrillers, comics, manga and anime. He’s an occasional journalist and likes to spend his free time watching movies and reading stuff about politics, science, medicine, etc. Manik also enjoys jogs in the park and workouts in the gym.