For the Cinderellas of Cross-country, the Running Shoes Fit 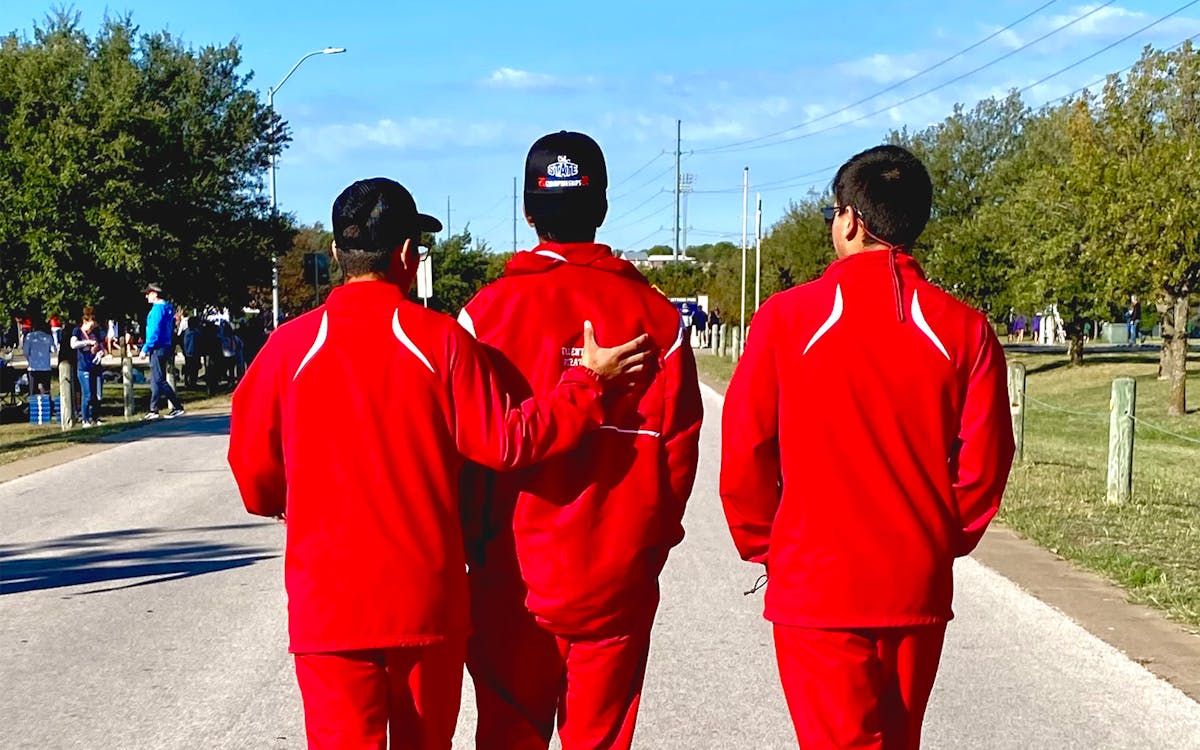 Participation trophies are a good way to elicit eye rolls: Let’s not salute someone for merely showing up.

But no one has yet created an award that could properly honor what three cross-country runners from tiny Valentine School accomplished by completing the class 1A state meet held earlier this month at Old Settlers Park in Round Rock.

Junior Eduardo Cardenas-Ramirez finished 36th; his older brother, senior Erick Ramirez, placed 85th; and sophomore Robert Alvarado came in 102nd in a field of 146 top qualifiers from around the state. Why would that be worth recognizing? Because the three runners make up 60 percent of their school’s entire male enrollment, and the town of Valentine, located about 35 miles northwest of Marfa and 25 miles east of the Mexico border, is home to an estimated 73 total residents.

High school enrollment at Valentine this academic year is eleven, the lowest among the 1,525 member schools belonging to the University Interscholastic League, the body that oversees sports at Texas public high schools. And that’s up from the nine that superintendent Debbie Engle reported to the UIL ahead of last year’s biennial reclassification.

The standard definition of a small town is a community that has no stoplight. Well, Valentine has no stores and no walk-in businesses. There is a post office, but the nearest gas pump or gallon of milk is a good half hour’s drive away.

“Our school is our community,” said Summer Webb, Valentine’s mayor.

The Valentine Pirates haven’t fielded a football team since the mid-1960s. It has been seven years since they had a boys basketball team, and that required adding some girls to four boys (which is allowed under UIL rules).

The cross-country squad—Garry Webb, son of the mayor, is the fourth member of the group—is the sole sports team that athletic director Brent McWilliams oversees. Cardenas-Ramirez and Ramirez are from a ranching family, and their work responsibilities at home are such that practices are scheduled during the school day’s athletic period, rather than after school. McWilliams has them run on school property, which might seem odd, given the wide-open spaces surrounding the school. His reasoning: “Liability. I don’t want anybody to get hurt off school property, get rattlesnake bit off school property.” After thinking that over for a moment, he added: “We have plenty of rattlesnakes on school property, by the way.”

Each of the state cross-country meets, from class 6A through 1A, girls and boys, consists of the top sixteen teams, each with five runners, plus individual qualifiers from other teams. Valentine was the only school to individually qualify three runners.

In a way, it was Valentine’s day.

Early on the Thursday morning before the meet, Valentine’s cross-country contingent—McWilliams, assistant coach and social studies teacher Bianca Porras, and the four runners—boarded the school’s Suburban for the nearly five-hundred-mile ride to Round Rock. The trip would have normally taken about seven and a half hours, but Porras built in some educational stops along the way. They headed to San Antonio before going up Interstate 35, with visits to the Alamo, the River Walk, and, by spontaneous popular demand, the Buc-ee’s in New Braunfels.

Porras graduated in Valentine’s class of 1998. “The biggest class in like fifty years, with eleven,” she said. After attending Sul Ross State in Alpine, Porras planned to begin her teaching career with a brief stay at her high school alma mater. “Been there nineteen years,” she said with a smile. “We’re very blessed. It’s why I haven’t ventured off.”

The day before the meet, the team members picked up their race packets at the park, toured the course, scanned the scenic vista at Covert Park at Mount Bonnell, and took in some culture, thanks to Porras, who has brought many a school History Fair group to Austin. They were in the LBJ Library so long, there wasn’t time afterward to tour the Capitol as planned.

On race day, breakfast was light—Cardenas-Ramirez had only two slices of toast with cream cheese—because the boys are often reminded by McWilliams, in his measured drawl: “A hungry dog runs best.” McWilliams grew up in San Angelo, attended Sul Ross, and is West Texas through and through. He’s coached football and boys and girls basketball, and he takes his cross-country training cues from his son, the head track coach at the University of Alaska Anchorage.

That Saturday, the cross-country team arrived at Old Settlers Park almost two hours before the 12:10 p.m. starting gun for class 1A boys. Though the late morning wasn’t particularly warm, McWilliams made sure his runners stayed in the shade, sitting beneath a live oak near the finishing stretch before beginning their prerace preparations.

Given the distance from Valentine, the only people from there to cheer on the Pirates were superintendent Engle and Alvarado’s family: parents Ralph Alvarado and Yesenia Carmona (a teacher’s aide at the school), brothers Ralph Jr. and Bryan, and Bryan’s five-month-old son.

The atmosphere at the state cross-country meet is far different from that of a UIL championship game in football or basketball. Admission is free. Spectators are almost exclusively relatives and friends, most lining the start-finish area and then immediately greeting the runners once they cross the finish line.

Coaching is somewhat minimal. McWilliams reminded his runners to essentially ignore well-wishers who might yell encouraging slogans like “Push it!” “Translate that into ‘relax and run,’ ” he told them. He stationed himself along the course in time to yell “Arms!” That was another reminder. “If you move your arms, your feet move faster,” McWilliams said.

Cardenas-Ramirez, the highest ranked of the Valentine trio, was predictably the first to make the right turn a few hundred meters from the end of the five-thousand-meter race—about three miles. He improved his finish from 59th last year and cut his time on the Round Rock course from 18:52.3 to 18:33.9.

Ramirez finished less than a minute later and Alvarado 22 seconds after that.

“I would have hoped for a little better, but we did well,” McWilliams said after checking the final results. “Two [runners] were here for the first time, and Eddie placed higher than he did last year. So, we’re headed in the right direction.”

“It was hard work, but it was worth it,” Cardenas-Ramirez said.

Before they climbed back into the Suburban for the long ride home, the boys bought black UIL state meet caps and sweats and promptly changed into them for the trip. “Minute we get back,” McWilliams said, “they’ll want to do basketball.” Of course, there is no team, but McWilliams arranged for a coed team to play against Big Bend High School in mid-November. The Pirates led their all-male opponents by 10 in the third quarter before Alvarado, the point guard, was sidelined with leg cramps. Big Bend won, 38–35.

Ramirez will be in the graduating class of two next spring and plans to attend Western Texas College, in Snyder. Cardenas-Ramirez will try to qualify for the state cross-country meet for a third time, Alvarado for a second.

“I never talk about state to the kids,” McWilliams said. “I believe they can go back, and I think they believe it. But there will be a lot of good kids running at regional. We’ll have to get after it that day.”

Wow, Why Are There So Many Sick Ray-Ban Shades on Sale Right Now?