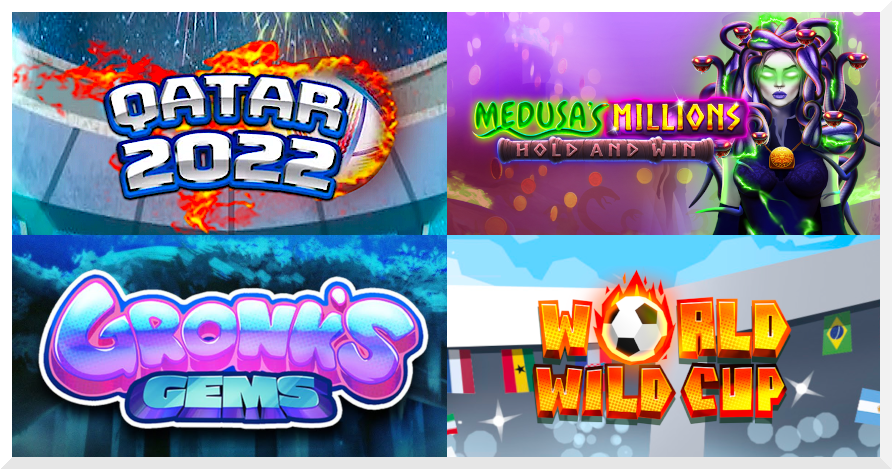 It’s FIFA World Cup time, so it’s only fitting that we have two World Cup-themed games occupying our best new online slots of the week for this edition. Don’t forget, you can try out all these top new slots totally free right here.

Qatar 2022 is the new football-themed game from Eurasian Gaming. It’s a classic three-reel slot with random multipliers on every winning spin. It’s just the thing to celebrate the biggest soccer tournament in the world.

Medusa’s Millions is a Greek myth-themed slot from Arrows Edge. Land the gorgon to trigger an expanding wild with vicious snakes that can replicate wilds across the game area.

Then we’re enjoying some cluster win fun with Hacksaw Gaming’s Gronk’s Gems. Land a matching cluster of up to 36 symbols or trigger the X-Gem symbol for big-money multipliers.

We have another soccer-themed slot to tuck in just before final whistle: World Wild Cup. Watch the soccer players go for goal and leave wilds in their wake!

We start our look at the best new online slots of the week with the first of the football-themed games. Qatar 2022 is Eurasian Gaming’s celebration of the World Cup and offers classic slot thrills with random multipliers after every win.

The first ever winter World Cup (at least, if you live in the northern hemisphere) is finally here and that means it’s time for slots developers to bring out their themed games. Straight out of the blocks are Eurasian Gaming who have eschewed the usual five-reel mayhem for something a little more classic.

Qatar 2022 is a three-reel slot featuring some lovely cartoon renderings of your favorite stars such as Neymar Jr, Cristiano Ronaldo, and Lionel Messi. You play just five paylines and there are wild symbols in play during the game.

A multiplier reel spins alongside the regular set. A random multiplier worth 1x to 15x is applied to all winning spins.

Qatar 2022 is a classic slot in every sense. There is no free spins bonus but you can play the gamble feature after any winning spin. The feature works like a red/black game where you simply guess the color of the next card drawn. You win double if you guess red or black correctly.

Qatar 2022 is perfect whether you’re excited about this month’s football World Cup or you just love three-reel slots. And those multipliers certainly add to the fun. Give it a spin for free today here at VegasSlotsOnline.

Something completely different now in our regular round-up of the best new online slots of the week. Medusa’s Millions is a fresh release by Arrows Edge which combines familiar five-reel play with expanding wilds and free spins.

The slot is themed around Greek myths and the evil witch, Medusa, whose gaze could turn you to stone. Medusa turns symbols into stone in this slot. She will also become an expanding wild, stretching down the reel to cover every position.

Medusa’s Millions utilizes the Hold & Win feature as well. You trigger the bonus by landing five or more gold coins on the reels in a single spin. You begin with three Hold & Win spins where all gold coins become sticky. The respin counter resets to three when at least one gold coin is in view. The feature ends when you run out of coins.

In addition, it’s possible to trigger one of three progressive jackpots during the bonus round. You win the Mini, Major, or Mega jackpot if a corresponding symbol lands on the reels during the final spin of the Hold & Win bonus round.

We have been enjoying some of the new Hold & Win slots to emerge in 2022. Add Medusa’s Millions to your list of must-plays this week. You can try the game for free by following the special link.

Don’t ever say we aren’t eclectic with our new online slots selections here at VegasSlotsOnline. Gronk’s Gems is the new Hacksaw Gaming release that features a very friendly troll and a whole heap of diamond-themed action.

In addition, that gem type becomes charged and starts to glow. Look out for the Epic Gem scatter too which can appear after a cascade. When it appears, all charged gems are transformed into the highest-paying charged symbol. They are absorbed by the Epic Gem and pay out as one giant cluster.

Gronk loves to protect his treasure but he’s willing to give some of it up if the right bonus symbols appear. You trigger the Gem Hoarder bonus with three or more Gem Bag scatters in any position.

Start with five free spins and bag a progressive multiplier that increases every time symbols are removed from the game area. You may also enjoy an added multiplier if the special X-Gem symbol appears and connects to a winning cluster.

Hacksaw Gaming have become known for taking some tried-and-tested slot mechanics and giving them a welcome power-up. With Gronk’s Gems, they have taken the cascading win modifier and given it a very 2022 twist. Play the game for free and see what you think.

Take to the pitch in World Wild Cup from Caleta Gaming. Follow the flaming wilds with multipliers and go for goal in this seven-reel slot!

It’s World Cup time, so let’s finish our round-up of the best new online slots of the week with another footie-themed game.

World Wild Cup is Caleta Gaming’s addition to a growing pile of football-themed slots. You begin by choosing teams which alters the football strips on the reels. Next, you spin a set of 5×7 reels to try to match up lines of symbols anywhere on adjacent reels. It’s also possible to match clusters of the same symbol on the reels. For instance, a cluster may cover a 2×3 block anywhere on the reels.

The flaming ball acts like a sticky wild symbol. It stays in place during a spin and adds an increasing multiplier.

When a footballer lands alongside a wild, he will spring out to take a shot. In doing so, he leaves a trail of wild symbols behind him and increases the wild multiplier by 1x. The footballer also turns into a wild at the end of the sequence.

In addition, you trigger free spins if the footballer scores a goal with the flaming ball. Watch out for the referee who may pull out a flaming card and turn 1–12 symbols into wilds. You begin with 15 free spins but you can trigger the same number again by scoring goals. The flaming ball multiplier keeps increasing and can not reset for the entire bonus.

World Wild Cup takes the cluster wins mechanic and hits it in the back of the net, just as Qatar 2022 is kicking off. Give it a play for free now.

And for more exciting games, make sure you visit our New Online Slots page!

Hurry: 9 Amazing Fragrances to Gift the People You Almost Forgot

9 Things We Regret Wearing to the Airport