Alejandro Davidovich Fokina knows that when he steps on centre court at the Western & Southern Open Tuesday, he will be facing one of the hottest players on the ATP Tour in Nick Kyrgios. That would make some players nervous.

“I always say that I prefer to play on the big stadiums,” Davidovich Fokina told ATPTour.com. “I increase my level and I prefer to play in those stadiums. With Kyrgios, who is a showman, it is for sure going to be a fun match to watch.”

The Spaniard knows the Australian reached the Wimbledon final, triumphed in Washington and advanced to the Montreal quarter-finals. Playing an opponent of his form is something Davidovich Fokina plans to embrace.

“He’s playing very good. He’s on fire right now. For sure it is going to be a tough match,” Davidovich Fokina said. “I will do my best. I will try to bother him on his serve, try my best and let’s see what happens.”

The Intesa Sanpaolo Next Gen ATP Finals alumnus has proven he can compete with the best players in the world. Earlier this season, Davidovich Fokina, known as “Foki”, advanced to his first ATP Masters 1000 final at the Rolex Monte-Carlo Masters. That run started with a lucky chestnut.

One of the Spaniard’s best friends received a chestnut from another friend, and he gave it to Davidovich Fokina ahead of the Monagesque tournament in the hopes it would give him luck. That chestnut has not left Foki’s racquet bag since.

“I always take it with me. It’s [from] one of my best friends. He thought it was going to bring me luck that week,” Davidovich Fokina said. “But I think we need to recharge that chestnut!”

Since Monte Carlo in April, Davidovich Fokina has won consecutive matches just twice. But by nature, he is optimistic.

“In life, you have a process with everything. You have to go step by step, you cannot rush to do things,” Davidovich Fokina said. “If not, you are going to crash into the wall. You have to take it slowly, quietly and go into your rhythm.”

Davidovich Fokina embodies that mindset with a tattoo on his chest that reads “step by step”. You can learn a lot about the Spaniard from his six tattoos, the second of which is a large tsunami wave on his left forearm. 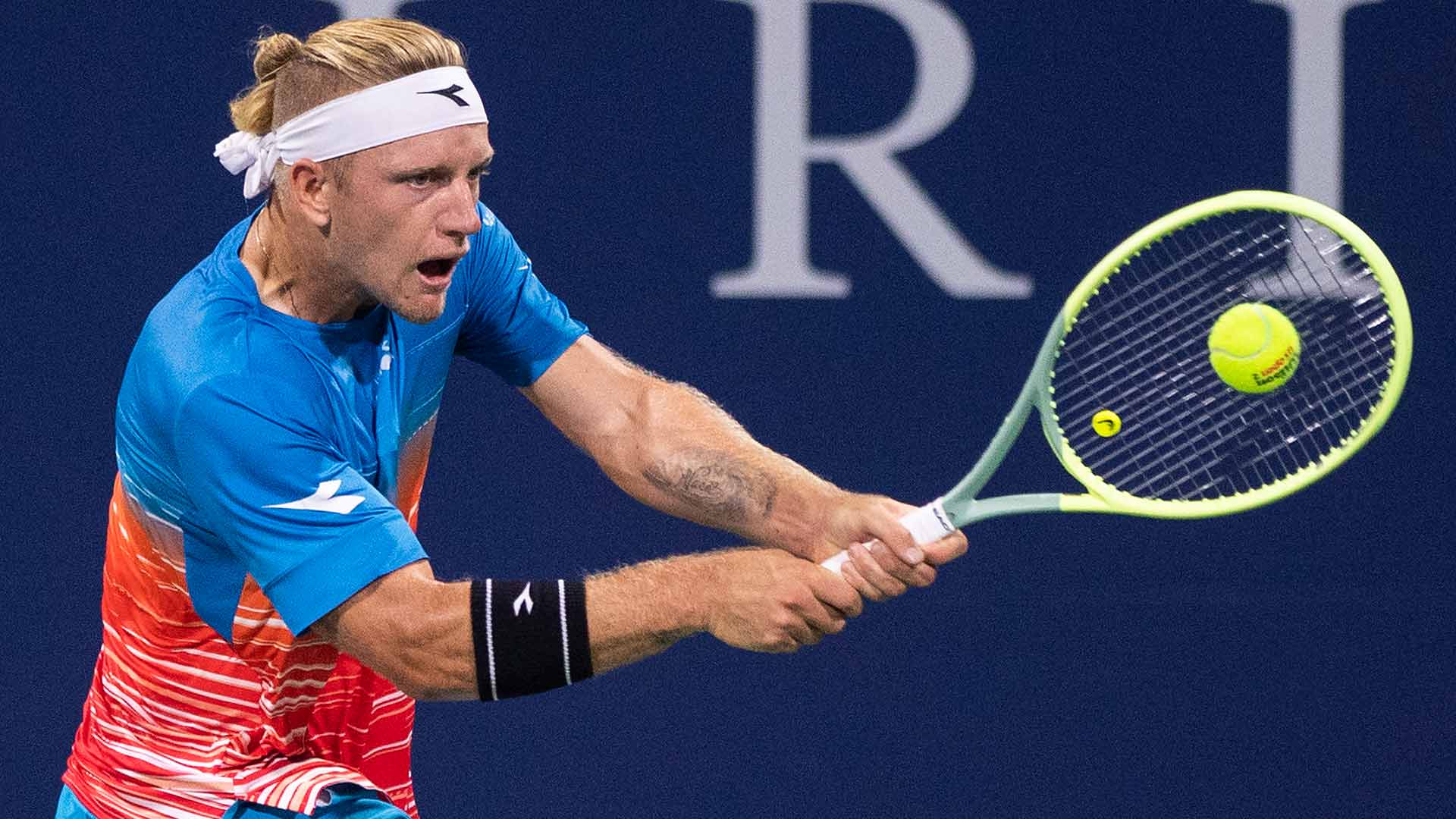 Alejandro Davidovich Fokina” />
Photo Credit: Mike Lawrence/ATP Tour
“With my team and myself, we always say I am like a tsunami,” Davidovich Fokina said, cracking a laugh. “Where I go, I race. I just wanted to have it on my body to remember every day what that means.”

These days, that is mostly in reference to his on-court demeanour, which he readily admits can be fiery. His coach, Jorge Aguirre, has even referred to Davidovich Fokina as a “volcano” on the court.

“That changes. A long time ago I was more like a tsunami off the court [too],” Davidovich Fokina said. “I was more impatient. I want to do a lot of things at one time. Now I’m more quiet, more calm. Every year the energy is going down. I’m getting older! Now I’m starting to be more patient and I can transmit that to the court, too.”

The yin-and-yang symbol on his right wrist also shows the Spaniard’s philosophical side.

Most of the time, you can find Davidovich Fokina having a good laugh. He is even happy to have a good chuckle at himself, like when he discusses his sock superstition. On the court, the 23-year-old wears one white sock and one black sock for matches.

“Since I was 15, I’m doing that with the socks. Now I cannot wear the same colour of socks,” Davidovich Fokina said. “[But] when I go out with my friends, I wear normal ones!”

Although the Spaniard knows he will face a tough test on Tuesday against Kyrgios, it is safe to say he will make the most of the experience.

What to consider before trying to avoid SALT limits

What to consider before trying to avoid SALT limits