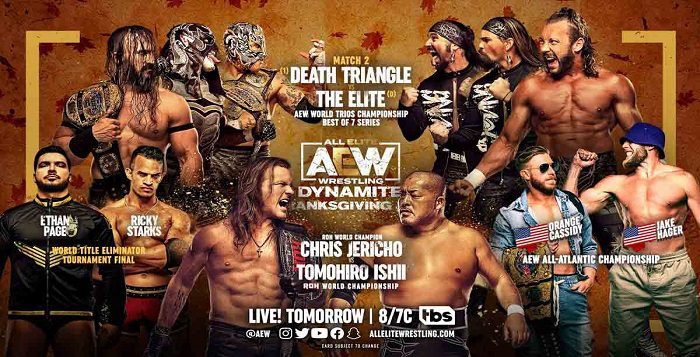 It’s the first show after Full Gear and thanks to William Regal, MJF is the new World Champion. That is enough of a story to carry things for the time being, but we have more important things to get to right now: like building up a Ring Of Honor pay per view in the next few weeks. Let’s get to it.

William Regal is in the ring to open things up and he lets us know the MJF isn’t here because he’s on the set of a major motion picture. MJF will explain things then, including the contents of an emails Regal sent him a few weeks ago. Cue Jon Moxley to rather slowly interrupt, meaning Regal can sneer a lot. Bryan Danielson runs in to keep them apart though and says that they have all done bad things.

Moxley slaps him in the face so Danielson begs him not to do this. Danielson talks about his dad having the same struggles that Moxley has had, saying that only Regal could help him through it. More begging doesn’t keep Moxley back, so he gets in Regal’s face and tells him to run far away and never come back. Regal turns and walks away as the fans sing him the Goodbye Song.

Keith Lee is asked about Swerve Strickland slapping him in the face when Swerve comes in. Lee says choose your words wisely so Swerve covers the camera and says let’s talk. That works for Lee.

Hager, with the Jericho Appreciation Society, is challenging. Cassidy has the Best Friends to even things up but Hager won’t let him put his hands in his pockets. That doesn’t last long and the lazy kicks into the dropkick have Hager in trouble. Hager runs him over but Cassidy knocks his hat off and sends Hager to the floor. Cassidy teases putting the hat off and uses it like a cape in a bullfight for Hager’s goons. The suicide dive is pulled out of the air though and Hager sends him into the post and apron.

We take a break and come back with Hager pulling Cassidy out of the air but getting caught in the Stundog Millionaire. The spinning DDT gives Cassidy two but Hager runs him over again. Hager gets his hat back and grabs the ankle lock, with Cassidy kicking the hat off. Cassidy rolls out and staggers Hager with the Orange Punch, setting up a cradle to retain at 8:36.

Post match the Factory comes out to surround the Best Friends….but the lights go out. Julia Hart is on the stage and raises her hand, with the House Of Black appearing to beat down the Best Friends. The Factory gets beaten down as well, leaving a staff member to get Dante’s Inferno on the stage. Black tells members of the House to rise.

Page has Stokely Hathaway with him and Starks is heavily taped up. Page grabs a wristlock to start and Starks is already cringing in pain. Starks tries o fight back but gets knocked into the corner for the heavy stomping as Page is enjoying this. There’s a knee to the ribs but Starks manages a spear, only to fall out to the floor. Page drives him into the barricade and we take a break.

Back with Starks slipping out of a fireman’s carry and knocking Page to the floor. Hathaway pulling Page out of the way of a dive, leaving Starks to crash hard. That’s enough for Hathaway to get ejected so Page goes up. The super powerslam is broken up though and Starks sends him crashing down but can’t follow up. A swinging neckbreaker drops Page again and there’s a tornado DDT to give Starks two. The powerslam gives Page two of his own but the Ego’s Edge is escaped. Starks hits a spear and then a third is enough to finish Page at 12:58.

We look at Samoa Joe winning the TNT Title at Full Gear. Wardlow is not pleased and wants his title back.

Jade Cargill and the Baddies went to a Bow Wow concert and were thrown out.

Jade Cargill and the Baddies are done with Bow Wow Wow and Jade is glad they have the belt back. The celebration is next week, and according to Mark Sterling, they have no comment on the Bow Wow situation. Oh and Kiera Hogan is fired from the team.

Non-title and the Elite are down 0-1 in the Best of 7 series. The Elite gets quite the entrance and the fans don’t seem to like them very much. At the same time, Pac has a face mask on due to a broken nose. Omega yells at Fenix to start and gets two off an early Sky High. The ring is cleared but Fenix is back in with a cutter to break up the Terminator dive. Fenix hits the big corkscrew dive to take out almost everyone else and the fans are rather pleased.

Back in and Pac grabs a waistlock on Omega, who elbows him in the face for a breather. Matt moonsaults off the top onto the Lucha Bros and Omega drops Pac as we take a break. Back with Pac biting Omega, which is enough to frustrate him into the hot tag to Penta. Everything breaks down and the V Trigger hits Pac, setting up the snapdragon.

The Bucks take Pac’s mask off to reveal the bad nose, setting up the triple superkick for two with the Bros making a save. The V Trigger connects but the One Winged Angel is escaped, leaving Omega to hit a GTS for two. Back in and Matt hits Pac low before pulling out a hammer. That doesn’t work for Penta, who breaks it up and pulls out his own hammer to knock Matt out for the pin at 14:49.

Thunder Rosa has officially forfeited the Women’s Title, making Jamie Hayter the official champ. Only about….however many days since the Interim Champion deal started late. Hayter and Britt Baker come out for a chat, with Baker saying they were never considering the interim moniker anyway. Hayter is THE champ and always was.

Hayter starts fast by suplexing Melo and Jay at the same time, followed by a suplex into a slam for two on Melo. Baker comes in and gets caught in a suplex, allowing the tag off to Nightingale. House is cleaned and Blue is dropped onto Melo for two. Melo manages to drop Nightingale for two of her own though and we take a break. Back with everything breaking down and the parade of secondary finishers kicking off. Blue gets knocked down and Baker hits the Stomp to finish Blue at 7:03.

Post match we’re told that because Thunder Rosa vacated the title, Toni Storm’s reign is official and she was never the Interim Champion.

Top Flight and FTR are in the back and after mutual respect is shown, the Ring of Honor Tag Team Title match is set for Rampage.

Here are the Acclaimed and Billy Gunn for a rap/chat. They’re happy to be here and Billy is scissor eligible again, but Jay Lethal/Jeff Jarrett pop up on screen (after being mentioned in the rap) with Jarret promising revenge for the disrespect. Billy says to get the old Jarrett off the screen so scissoring can ensue.

Jericho is defending and we hear about their history 25 years ago in Japan. They slap it out and then forearm it out with Ishii getting the better of things, followed by….another chop off. We take a break and come back with Jericho’s chest busted open and the chopping continuing. Ishii knocks him into the corner and powerbombs him back out for two.

The lariat doesn’t work for Lariat as Jericho kicks him to the apron, only to have the triangle dropkick broken up. Jericho knocks him to the floor for a double crash and they forearm it out again. Back in and they trade German suplexes, with Ishii popping up multiple times, only to fall down after the second.

The Lionsault gives Jericho one but Ishii is back with the sliding lariat for two. Ishii can’t hit the brainbuster but he can hit a Codebreaker of his own. The hard lariat gives Ishii two but the brainbuster is countered into the Walls. We’ll make the that Liontamer so Ishii flips Jericho off….and then taps at 15:38.

Post match Jericho goes after Ian Riccaboni on commentary but Claudio Castagnoli comes out for the save to end the show. So that’s probably Ring Of Honor.