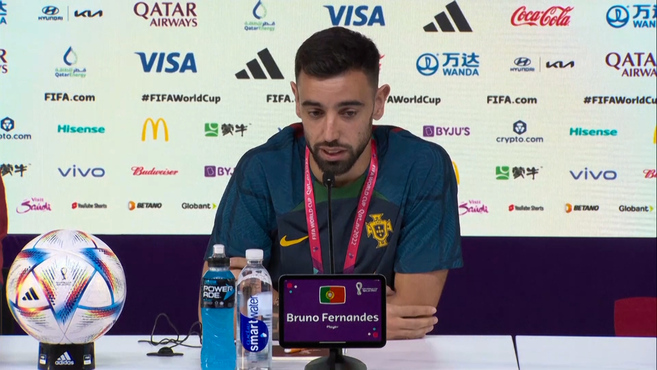 Bruno Fernandes was quick to squash rumors over a potential rupture between him and Cristiano Ronaldo, after the latter’s Manchester United contract was terminated with immediate effect.

After CR7’s controversial interview with Piers Morgan, social media was swarmed with speculation that the pair had fallen out, speculation that only grew stronger after a video surfaced of Fernandes “frostily” greeting his teammate when the pair met up with the Portugal squad for the World Cup. Now that the former Real Madrid man has officially left the United, there has been much conjecture that the atmosphere in the Portugal squad would be far from harmonious.

But, according to Bruno, that’s not the case. “I don’t feel uncomfortable, I don’t have to pick a side. It is a privilege to play for the national team with Cristiano, and it was a dream to play at the club (Manchester United), I’ve always said that. Cristiano has always been an inspiration for me and it was a dream come true to be able to play with Cristiano the club, but we know that nothing lasts forever”, said the midfielder on his compatriot’s departure.

After Ronaldo’s romantic return to United was confirmed in the summer of 2021, he had a good first season scoring 24 goals in 39 games for the Red Devils. However, the marriage between the two turned sour this season after the Portuguese striker fell down the pecking order at United, which resulted in the rupture between him and Red Devil’s boss Erik ten Hag.

As it became clear that Ronaldo’s patience had worn thin after not getting the move he so desired in the summer, he took matters into his own hands. His interview with English journalist Piers Morgan, in which he slammed United for their supposed ‘disrespect’, proved to be the final straw for the club and after a week of pondering over how to resolve the matter, United finally decided to terminate his contract.