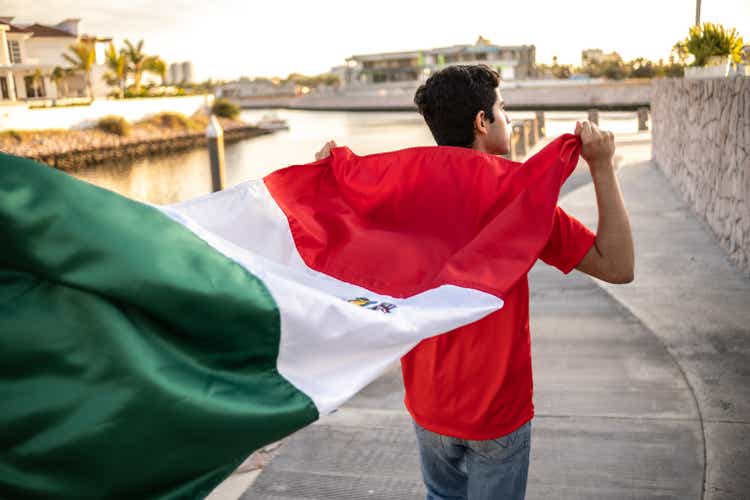 Those who follow The Lead-Lag Report would note that I’d been highlighting the prospect of melt-up conditions since early October; now with that out of the way, it may be a good time to take stock of things and re-position your portfolio for what comes next as my inter-market signals are all pointing to a shift.

In fact, earlier this week, I had gotten into some post-melt-up portfolio ideas with Bob Elliott on the Lead-Lag Live platform which may be of interest to you.

As a post-melt-up play, today I’d like to review the Mexico Fund (NYSE:MXF), a closed-ended fund that focuses on stocks listed on the Bolsa Mexicana de Valores, S.A. de C.V. There are a few reasons why I think MXF could work, both in the medium-term and the long-term.

Firstly, as noted in last week’s edition of The Lead-Lag Report, I believe it is a good time to switch to more defensive assets, as recessionary conditions are fast gathering pace. Both the 10Y/3M and the 10Y/2Y spreads have dropped well into the red; historically, when these metrics have slumped into the negative zone, it’s been followed by a recession in around 12-18 months.

Mind you, we’re not just staring at a US recession, but a global recession, as discussed in a conversation with Daniel Lacalle on the Lead-Lag Live Portal.

If recessionary conditions snowball, and institutional flows get increasingly selective about where they’d like to deploy funds, I believe Mexican assets could serve as a useful fund magnet as the fiscal landscape there is still quite resilient. I believe the Mexican administration has done well to keep their house in order during the pandemic, and this is backed up by a well-controlled debt to GDP of a little over 51%. They’ve also done very well to tackle tax evasion which has yielded higher tax revenue and boosted the fiscal position. Just for some context, between 2018 and 2021, VAT tax evasion was halved from 1.9% of GDP to 1% of GDP.

All these factors will also likely reflect well on the Mexican Peso which has proven to be one of the better-performing EM currencies of the year.

I’ve already highlighted why the US dollar could be poised to face further pressure, but besides that, do also note that despite the Peso’s strength this year, on a trade-weighted basis, the currency still has ample room to cross its 20-year average.

In addition to that Mexican real rates are of the few EM options that are currently in positive territory.

What could also tilt things in favor of Mexico and the Peso is the growing near-shoring narrative. Corporates have learned that US-China trade tensions will always serve as a lingering headache, and the recent Russian-Ukraine fiasco has also drummed up support for keeping the supply chain and production base closer to home.

All these developments will likely result in greater investments in Mexico via the FDI route. So far, on a YTD basis, FDI in Mexico grew by 30%, crossing the $30bn mark for the first time since records were maintained! Crucially much of the FDI has come from neighbors USA and Canada (jointly accounting for almost half the FDI), reiterating the near-shoring narrative.

I believe things are only getting started and this was reiterated by the Mexican economic minister who noted that over 400 North American companies have expressed their desire to relocate from Asia to Mexico! Besides the proximity that Mexico offers, the wages too are very competitive. According to ING, average manufacturing wages in Mexico work out to roughly $3.5/hour, which is 25% lower than the hourly manufacturing wages in Brazil and 40% better than the hourly manufacturing wages in China! An increasing chunk of foreign flows can help get its relatively low fixed capital formation closer to the OECD average.

Coming back to my original point of defensive posturing in the face of heightened volatility, note that MXF has actually done reasonably well this year; even as the VIX gained 34% and the MSCI ACWI (ex-US) index collapsed by 17%, MXF ended up delivering low single-digit returns.

I believe this also speaks to the defensive coloring of MXF where the dominant sector is the consumer staples sector, accounting for 30% of the portfolio.

Finally, to conclude, also consider that the valuations of MXF remain relatively attractive. Despite a steady performance this year, the ETF currently trades at only 10.83x P/E, ~42% lower than the 5-year average of 19x.

Sometimes, you might not realize your biggest portfolio risks until it’s too late.

That’s why it’s important to pay attention to the right market data, analysis, and insights on a daily basis. Being a passive investor puts you at unnecessary risk. When you stay informed on key signals and indicators, you’ll take control of your financial future.

My award-winning market research gives you everything you need to know each day, so you can be ready to act when it matters most.