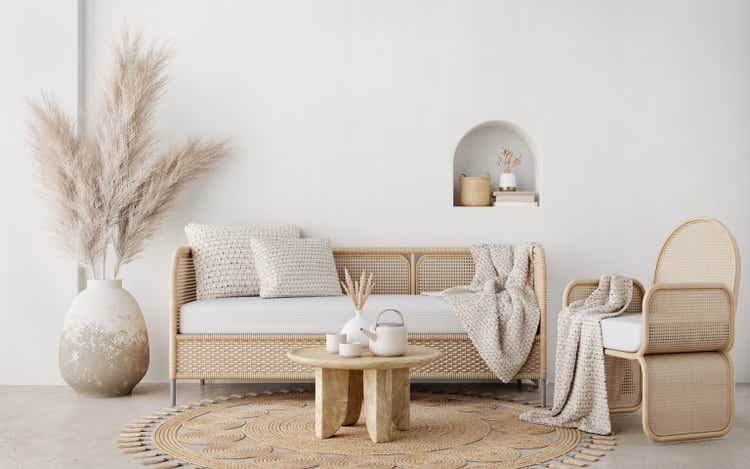 Given the economic conditions we are faced with today, you might not think that a furniture business would be all that appealing. But one company that continues to generate attractive upside on both its top and bottom lines is Haverty Furniture Companies (NYSE:HVT) (NYSE:HVT.A). This enterprise, which operates as a specialty retailer of residential furniture and accessories, continues to grow and it has the benefit that shares are trading at low levels on both an absolute basis and relative to similar firms. Absent something changing materially for the worse, I do believe that further upside for shareholders is on the table. As a result, I feel perfectly comfortable with the ‘buy’ rating I assigned the company earlier this year.

Great performance in a tough market

In late January of this year, I wrote an article that discussed the investment worthiness of Haverty Furniture. In that article, I talked about how the company had struggled over the prior few years before rebounding in 2021. At the time, I felt as though shares were cheap. But at the same time, I also said that even if financial performance stabilizes instead of continues to improve, that it should still make for a robust prospect for value-oriented investors. My case was further strengthened by the fact that the company had no debt and had a plethora of cash on hand. At the end of the day, these facts led me to rate the business a ‘buy’ to reflect my view that it should outperform the broader market moving forward. Fast forward to today, and my call so far has played out quite well. At a time when the S&P 500 is down by 10.5%, shares of Haverty Furniture have generated a profit for investors of 15.3%.

This return disparity makes a great deal of sense when you dig into the numbers. In particular, I would like to focus on how the company has performed for the first three quarters of the 2022 fiscal year. During this time, sales came in at $766.7 million. This is 2.7% higher than the $746.9 million generated one year earlier. Basically all of this growth came from a 2.6% improvement in comparable store sales. That follows the 22.5% increase in comparable store sales that the company experienced the same time one year earlier as it rebounded from the darkest days of the pandemic.

With this rise in revenue also came some interesting profit figures. To be clear, not everything from a profitability perspective has been robust. Net income, for instance, ticked down modestly from $66.5 million to $65.6 million. Meanwhile, operating cash flow plunged from $89 million to $38.2 million. Having said that, if we adjust for changes in working capital, cash flow would have actually risen, climbing from $83.5 million to $83.9 million. And over that same window of time, EBITDA for the company also improved, rising from $98.4 million to $99 million.

At first glance, this kind of year-over-year growth may not seem that impressive. But you have to consider that, first, the furniture market is not exactly a space that’s known for rapid growth. And second, you have to consider how current economic conditions have been. What’s really impressive is that growth seems to have improved even further the later into the year we go. In the third quarter of the company’s 2022 fiscal year, for instance, sales totaled $274.5 million. That’s 5.4% higher than the $260.4 million generated the same quarter last year. Comparable store sales for the company came in particularly strong at 6.3%. Interestingly, this increase came at a time when in-store traffic and written business for the company was down year over year. Written business, for instance, had declined by 7.2%. This means that pricing made-up were these other areas lacked. In particular, the company benefited from a 3% increase in its upholstery operations and from an 11.2% rise involving sales of bedroom furniture.

This rise in revenue brought with it a modest improvement in profitability. Net income rose from $24.2 million in the third quarter of 2021 to $24.6 million the same time this year. Operating cash flow is still down, having fallen from $31.4 million to $11.9 million. But if we adjust for changes in working capital, it would have risen from $28.5 million to $31.4 million. Meanwhile, EBITDA for the company also ticked up modestly, inching up from $36 million to $36.2 million. Using this improved profitability, management elected, on November 11th, to announce a $1 per share special dividend on top of the $0.28 per share quarterly dividend for shareholders. For owners of the Class A stock, these numbers are $0.95 and $0.26, respectively. These amounts will be payable to investors on December 13th who are on record owning the stock as of November 28th. That will translate to a roughly 4% dividend, granting shareholders $20.6 million in total.

In truth, we don’t really know what to expect for the rest of the fiscal year. But if we annualize results experienced so far, we would get net income of $89.6 million, adjust and operating cash flow of $116.9 million, and EBITDA of $135.4 million. Given these figures, the company is trading at a forward price to earnings multiple of 5.7, at a forward price to adjusted operating cash flow multiple of 4.4, and at a forward EV to EBITDA Multiple of 2.7. As you can see in the chart above, these numbers are virtually identical to if we were to value the company using data from 2021. In addition to shares of the company looking cheap on an absolute basis, they also look affordable relative to similar firms. As you can see in the chart below, I compared the company to five similar enterprises. And in each of the three cases, only one of the five companies was cheaper than our prospect.

Based on the data provided, I must say that I continue to be impressed with the results achieved by Haverty Furniture. Management continues to do well in growing the company’s top and bottom lines for the most part. The firm also has cash in excess of debt totaling $143.98 million. Combined with a low market cap, this brings the enterprise value of the company, relative to the cash flows it generates, down considerably. When factoring all of this in, it just makes sense to me for the company to still represent a solid ‘buy’ opportunity even after seeing the kind of appreciation it has achieved over the past several months.

Alachua County will spend $2.5M in federal aid on a publicly-owned slaughterhouse