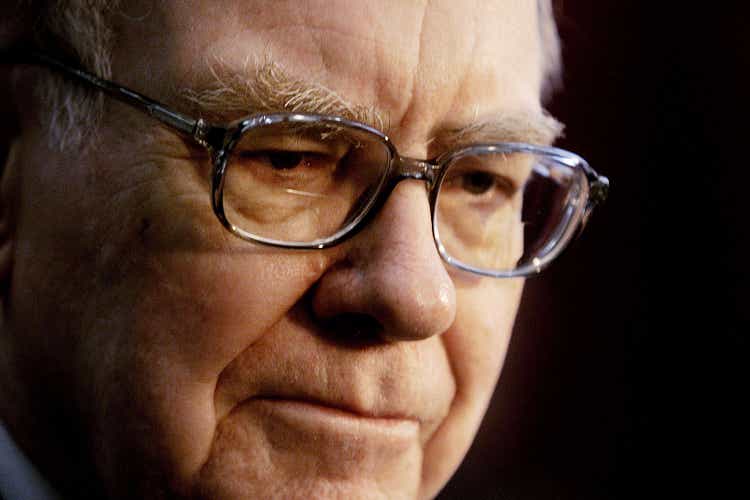 Berkshire Hathaway (NYSE:BRK.B) now owns so much Occidental Petroleum (OXY) stock that it is consolidating the company’s financial statements with its own. This might look like an accounting technicality, but it actually has major implications on the earnings that Berkshire will release going forward. When you own more than 20% of a company, you start reporting using the equity method, under which a portion of the company’s earnings become your own. This is in contrast to passive stock holdings, where the company’s stock price determines its contribution to your earnings.

The end result, in fundamental terms, is that Berkshire’s earnings should be less volatile going forward. Warren Buffett and Charlie Munger have criticized mark-to-market accounting of stock holdings in the past, seeing it as a distortion of earnings. In the long run, Berkshire’s performance should be the same whether OXY is a stock or a subsidiary, but the new method of accounting should give investors extra clarity when interpreting BRK.B’s financial statements. So, it’s a positive from the perspective of an investor who finds Berkshire’s rather complex financial structure difficult to understand.

A Primer On Different Accounting Methods

There are a lot of different ways that a company can account for a subsidiary. The one you use largely depends on how much of it you own, and whether you have control of it. The three most common methods are:

With financial assets like stocks and bonds, you account for the asset based on the type of security it is. Bonds held for trading are first measured at fair value, then later at amortized cost. “Designated at fair value” bonds are reported at fair value, both on the balance sheet, and on one of profit & loss or other comprehensive income (“OCI”). Available for sale securities mainly affect the income statement.

It’s equities that we’re really concerned with here. Berkshire holds Occidental Petroleum common stock. Changes in fair value are usually reported through profit and loss, in which case they affect net income. They can also be reported through OCI, in which case they don’t reduce net income, but do appear below the income statement as another kind of income/loss. Either way, stock price swings affect how much you appear to be earning.

The equity method is how Berkshire Hathaway now accounts for its Occidental Shares. It’s used for “associates” (large holdings) and joint ventures. Under this method, you multiply your percentage ownership in the other company by its earnings, and include that amount in your own earnings. You also add the earnings to your balance sheet, and subtract dividends. Dividends are subtracted to reflect the reduction in the subsidiary’s assets; on the other hand, collecting them makes a positive impact on your cash flow statement.

This is the kind of accounting Berkshire will use if it ever acquires 50% of OXY. This is similar to the equity method in that earnings are combined, but different in that assets are reported at book value instead of fair value. On the whole, this method reduces financial volatility the most out of the three major ones.

How OXY Will Contribute To Berkshire’s Bottom Line

Berkshire accounting for OXY with the equity method will help Berkshire’s bottom line. It won’t necessarily make Berkshire appear more profitable, but it will make it more consistently profitable, provided that oil prices remain above OXY’s breakeven level ($40). Even the most ardent oil bears would be reluctant to think that oil is going below $40, so OXY should be going profitable going forward. It may even be able to deliver rising earnings with oil prices staying flat. OXY has paid off $9.6 billion in debt so far this year. The lower your debt, the lower your quarterly interest expenses, so OXY might not need staggeringly high oil prices to keep growing.

More to the point, OXY’s rising earnings will now show up directly in Berkshire’s financial statements. This will result in less earnings volatility, and fewer non-cash items showing up in earnings releases. This probably isn’t something that Buffett himself considers material, as he thinks that a stock’s value is its cash flows and assets, not its price. However, it could be significant to Berkshire investors. Because of all the stocks it owns, Berkshire’s income statements are hard to interpret. In many quarters, the company shows losses, particularly during bear markets. An investor might look at this and say, “well, I know that Buffett thinks the stock losses shouldn’t be part of earnings, but what’s the ‘real’ number?” With OXY as a subsidiary, the ‘real’ number will be easier to figure out, which will be a boon to small investors with little accounting knowledge.

The impact will likely be substantial. In the last 12 months, OXY had $12.9 billion in earnings. According to CNBC, Berkshire owns 194.35 million shares in the company, about 20%. 20% of $12.9 billion is $2.58 billion, which would increase Berkshire’s highest ever reported earnings by 2%. So, if oil prices remain relatively high, Berkshire’s earnings will increase by virtue of owning OXY. Combine with that Berkshire’s already modest valuation (2.38 times sales, 1.54 times book, 20 times operating cash flows, etc), and this picture looks very enticing.

As I showed in the previous paragraph, OXY will likely benefit Berkshire Hathaway’s shareholders. Being reported as a subsidiary, it will smooth out Berkshire’s earnings, making the decision to invest more straightforward. But the positive aspects of this investment don’t end there. If Berkshire decides to go ahead with a full acquisition, then OXY will gain financial advantages, which will in turn translate into benefits to Berkshire.

One of the main bearish talking points about OXY is its historically precarious finances. In 2020, when WTI futures went negative, the company was stuck with a huge amount of debt on its balance sheet. In 2020, for the full year, OXY delivered a $-17 per share loss, which is about a quarter of the current stock price. Shareholder equity also got slashed in half due to rising debt. Most oil companies did pretty poorly in 2020, but OXY did worse than most, because it was so heavily leveraged. Interest expenses took a large bite out of earnings. Interest rates were low in 2020, but OXY’s interest expense increased 40%, due to the sheer amount of debt.

If Berkshire Hathaway ever totally acquires OXY, then that won’t happen again. Berkshire has $109 billion in cash on its books. It is more than able to transfer money to a subsidiary to help it survive should that be needed. Over time, this could become a real competitive advantage. Oil companies in general are capital intensive, requiring lots of debt. In 2015, when oil prices collapsed, many oil stocks fell much more than oil prices did, because their large debt loads created interest expenses that caused them to turn unprofitable. As a part of Berkshire, OXY will be less vulnerable to this compared to other oil companies, which may help it to grow over time.

As we’ve seen, Berkshire’s Occidental Petroleum investment could really pay off for shareholders. OXY is already putting out high earnings, which will add to Berkshire’s own, and synergies could be achieved if Berkshire pursues a full buyout. These are all very exciting things. However, there are real risks and challenges for investors to watch out for, including:

The bottom line on Berkshire Hathaway is that it has always made good investment decisions, and Occidental Petroleum looks like the latest in a long line of winners. Berkshire stock is relatively modestly valued, and the addition of OXY to its portfolio will add a lot of free cash flow. If you ever wanted to buy into Buffett’s empire, now is as good a time as any. The stock isn’t as cheap as it was a few weeks ago, but it’s still a relatively good value.