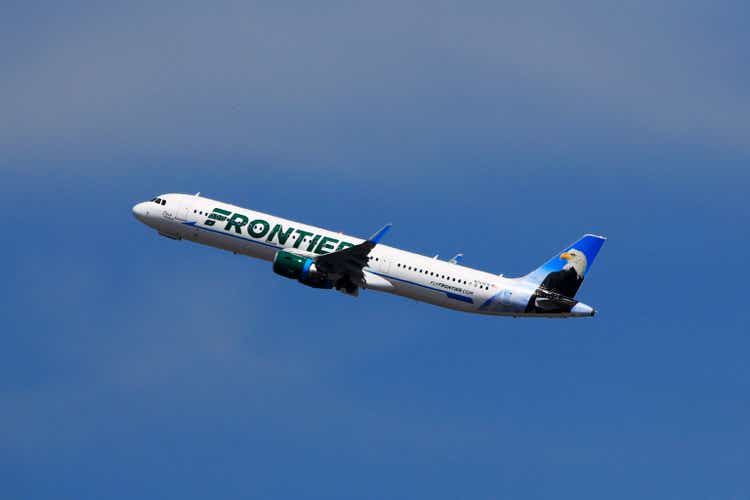 Shares of Frontier Airlines (NASDAQ:ULCC) have performed slightly worse than the market, losing slightly over 3% compared to a 2% loss for the S&P 500, since I covered the company’s third quarter results. The company has previously shown a strong uptick in its share prices driven by the termination of the merger agreement with Spirit Airlines (SAVE) removing concerns that Frontier Airlines would significantly overbid and possibly be tied into a years-long effort to gain approval to acquire Spirit Airlines. Since then, the stock markets went through a sell off due to inflation, only to recovery from that later on. Frontier Airlines was no exception to that. In this report, I will be analyzing the Q3 2022 results and the Q4 2022 outlook.

Just taking a very broad view on what Frontier Airlines delivered vs. what it had guided for, it can be seen that capacity expansion was at the low end of the range provided while adjusted expenses excluding fuel costs were $10 million better than that the low end suggested and $30 million better than the high-end figure. Fuel costs per gallon were higher than what Frontier Airlines had guided for and that also marks the concern I have with airline guidance at this moment as some guidances are a bit too optimistic on the fuel price environment. Nevertheless, adjusted pre-tax margins exceeded the guided range. This is due to the adjusted ex-fuel costs being lower than anticipated offsetting the higher fuel costs than what was guided for in combination with continued revenue strength.

Revenues missed expectations by $1.93 million, but earnings per share were $0.03 higher than expected.

Revenues increased by 35% compared to 2019 on capacity being 12% above pre-pandemic levels. As is the case for all airlines, strong demand for air travel led to strong topline results, and Frontier Airlines saw a record high of $78 in ancillary revenues per passenger, which is up 38% compared to 2019. So, it does seem that ancillary revenue growth is in line with the total passenger revenue growth. Margins did exceed what Frontier Airlines had guided for, but still included a 0.1 percentage point impact in the third quarter. So, absent of the hurricanes, things would have been even better in the third quarter.

Frontier Airlines: Aiming For A Strong End Of 2023 And More

For the fourth quarter, Frontier Airlines is targeting capacity growth of 15% to 17%. The adjusted costs excluding fuel are essentially the same as what was guided for the third quarter, and while the comparison bases for the capacity expansion are different there’s a strong indication that on a similar cost basis capacity is growing or in other words unit costs are coming down. The expected fuel price per gallon also is lower than the third quarter effective gallon costs, and the IATA Jet Fuel Monitor shows that fuel prices have come down by 3.6% in the past month and are currently $3.25 per gallon. These are prices paid at the refinery so actual costs for fueling and taxes likely will add to the cost, but overall it seems that quarter-over-quarter a reduction in unit fuel prices is expected. Higher capacity that should translate into higher revenues in combination with better cost amortization and lower unit fuel price are expected to produce an adjusted margin of 3% to 7%. So, we’re seeing how scaling the business is expected to add to the margins.

Also important are expectations for 2023. Frontier Airlines is targeting $85 in ancillary revenue per passenger which will further boost topline growth and expects 30% capacity growth for 2023 compared to 2022. That’s a significant increase in capacity, but just from improved utilization 12% capacity increase can already be achieved and the fleet will grow by 20%. The Airbus A320neo family aircraft also are a game-changer for Frontier Airlines providing 10 additional seats for the A321neo compared to the A321ceo while the A320neo offers six additional seats over the A320ceo. So upgauging also adds to the capacity expansion. A quick calculation would point at a 34% increase in capacity, but that does not include the actual higher seat counts on the A321neo and A320neo deliveries. A potential pressure is that delivery delays are likely to result in some deliveries slipping into 2024.

Conclusion: Frontier Airlines Has An Admirable Plan To Unlock Upside For Stock

About the third quarter results, there isn’t really much to say. It was a good quarter with strong revenues and fuel prices slightly higher than expected but results were slightly better than expected. More exciting is the 2023 plan which includes a 30% increase in capacity. That should significantly improve unit costs while improving the revenue potential. There obviously are two risks, the first one is expanding beyond demand but we remain in a situation where the industry is the limiting factor so any supply from airlines should be effectively filled for the moment. The other risk is that Airbus cannot supply the aircraft it committed to delivering in 2023. That would, however, be an inability for the industry to expand supply and would again be resulting in higher prices or at least keep the current high airfare environment alive.