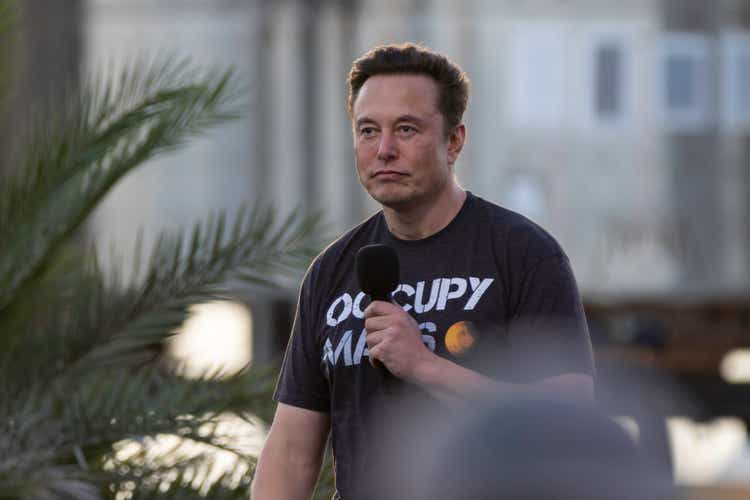 Tesla (NASDAQ:TSLA) is one of the companies that benefitted the most from ultra-low interest rates and that saw its market capitalization expand massively during the pandemic-impacted years 2020 and 2021. Things are changing, however, and Tesla has vastly underperformed the market so far this year. A multitude of issues hurts Tesla’s near-term and longer-term outlook, and since shares are not cheap despite the share price drop this year, there is further downside potential.

Tesla Is Facing Many Issues

Let’s start with something positive: Tesla is a leading EV player that will generate compelling business growth this year and that operates with above-average margins. That’s a pretty strong result for a company that has not been around for many decades.

That being said, Tesla is facing a range of headwinds in the coming quarters and years, some of them company-specific, while others are driven by an adverse macro environment. Let’s take a look at some of the key issues that could be a problem for Tesla going forward:

Pricing And Demand Problems In China

China is, by far, the most important country for Tesla, both when it comes to production and when it comes to sales. Tesla’s factory in China is its most profitable one, making Tesla’s China business integral to the company as a whole. In China, Tesla is seemingly facing considerable headwinds.

The company has been lowering prices repeatedly over the last couple of months, and yet, demand has not been as strong as Tesla hoped it would be, some reports suggest. See, for example, the following excerpt from a report from Seeking Alpha:

Ideally, investors want to invest in companies with pricing power, where customers are buying up products even as prices increase. Think, for example, Apple’s (AAPL) ability to sell more and more iPhones despite rising prices. Tesla has lowered the price of its vehicles in China repeatedly, and yet it looks like demand is waning. After all, there’s a wide range of reports that show that delivery times of Tesla’s vehicles are declining. This, in turn, suggests that Tesla’s backlog is shrinking, i.e. fewer new orders are coming in relative to the vehicles Tesla produces.

The combination of declining delivery times and declining prices suggests trouble for Tesla in its most important market. Either, the company will have to lower prices further in order to revive demand, which would put even more pressure on margins, or Tesla could face a situation where it cannot fill capacity, as there aren’t enough orders once Tesla has worked through its backlog. Both situations suggest that profitability in Tesla’s most important market could come under pressure in the coming quarters.

There’s also another China-specific risk. Tensions between China and the West have risen in recent years, and a potential escalation between Taiwan and China is a macro risk factor. Apart from China-based equities, which are oftentimes priced for disaster today, Tesla could be one of the most exposed companies to this macro risk. It relies heavily on China for manufacturing, it relies heavily on China for sales, as China is the largest EV market in the world, and due to China’s dominance when it comes to battery production and all kinds of materials, Tesla also relies heavily on China for supplies. In other words, among Western companies, Tesla is among the companies that are most at risk if the Taiwan conflict escalates. It seems possible that investors will increasingly factor this into their investment decisions, which could result in share price headwinds for Tesla.

Another risk factor for Tesla is rising competition. It’s true that competition has been a bear argument for years, but it increasingly looks like this is now, in fact, becoming a problem. Not only has Tesla lost the advantage in the highly important electric truck business, as its Cybertruck is still not available while competitors Ford (F) and Rivian (RIVN) are successfully selling their electric pickups, but Tesla is also at risk of losing its leadership position in the EV space, overall. BYD (OTCPK:BYDDY)(OTCPK:BYDDF) has emerged as an extremely capable, fast-growing EV player that could sell more EVs next year, even when we do not count plug-in hybrids. In October, BYD sold 103,000 pure EVs (220,000 including PHEVs), with a growth rate of 150% year over year. That annualizes at more than 1.2 million, with a growth rate that is way higher than the growth rate Tesla has achieved in the recent past. If these trends continue, BYD will easily become the leader in the global EV space by volume, which could put pressure on Tesla’s margins (as BYD could lower market-wide prices thanks to better scale), and which could also result in less interest in Tesla by investors.

Add other emerging competitors both on the high end, such as Lucid (LCID), and in the value segment (e.g. XPeng (XPEV)), and the picture could be getting worse for Tesla.

Elon Musk, Tesla’s CEO, is a controversial person. He has many fans, but he also has many critics. And recent things he did could have a negative impact on Tesla’s future performance, I believe.

First, his actions as the new owner of Twitter did not make everyone happy. Some reacted very negatively to the changes he brought — it’s possible that this will make some people reconsider buying another EV from Tesla. His suggestions for a peace plan in Ukraine also resulted in some negative PR, which could further reduce the number of people willing to buy from his companies. These controversial actions also could result in more scrutiny by regulators.

Second, he is now very occupied with Twitter, which will arguably mean that he has less time guiding Tesla. When his time is diverted across many different projects, that could negatively influence the decisions he makes, which could hurt Tesla in the long run.

Last but not least, Musk continues to sell parts of his stake in Tesla — despite the fact that he stated that he was “almost done selling” one year ago. Ongoing selling by the most important insider could hurt sentiment further — that has already been visible in some statements, comments, etc. from investors, and if Musk continues to sell shares, that will likely accelerate.

So while Elon Musk surely had a large positive impact on Tesla’s performance in the past, Elon Musk’s importance as a Tesla insider also poses a risk for investors that shouldn’t be neglected.

The Macro Environment Is Far From Great

Another problem for Tesla is that the macro environment in many parts of the world isn’t great. Lockdowns in China hurt demand and consumer sentiment, while an energy crisis in Europe and record-high inflation will hurt consumers’ ability to buy high-priced vehicles. In the US, inflation remains well above the norm as well, pressuring real disposable income:

With consumers being under pressure, their ability and willingness to buy high-end vehicles will likely shrink. Add rising interest rates, and financing a new vehicle becomes even less attractive. With many people expecting a recession in the US in 2023, it is likely that Tesla and other automobile companies will feel headwinds from an adverse macro environment.

Over the last couple of years, and especially in 2020 and 2021, money was ultra-cheap. With interest rates at a very low level, and with investors being interested in ESG themes, higher-growth story stocks such as Tesla saw their valuations expand massively:

Between early 2017 and early 2022, Tesla saw its revenue grow by an attractive 670%. Its market capitalization, however, expanded by more than 3,000% — there clearly was a big disconnect between Tesla’s underlying performance and the way the market valued the company. As we can see in the above chart, that was mainly due to the massive share price gains in 2020 and 2021 — before that, Tesla’s revenue had outperformed its market capitalization gains.

When seemingly endless sums of money are flowing into a stock despite the fact that the underlying performance is lagging far behind, that poses the risk of creating a bubble. Similar issues were visible in other EV stocks at the time, but Tesla has, by far, been the EV stock with the highest market cap, thus the problem was especially noteworthy here. At the peak, Tesla was trading with a market capitalization north of $1.2 trillion, which was an outrageously high company value not too long ago. Even today, only a small number of companies are trading with a market capitalization this high.

So far this year, Tesla has declined by close to 60%, destroying hundreds of billions of dollars in value. Those that bought Tesla early on are still easily in positive territory, but for those that bought over the last two years or so, Tesla has been far from a success story — despite the fact that the company continued to grow its revenue and profit. This reminds me of the performance of Cisco (CSCO) and Microsoft (MSFT) following the bursting of the dot.com bubble — these companies continued to execute well and grew for many years, but the fact that prices were inflated too much during the bubble still resulted in negative price returns for many years.

With Tesla trading down almost 60% relative to where shares traded at the beginning of the year, TSLA stock has become a lot cheaper. But that doesn’t mean that Tesla is cheap. Tesla still trades at more than 40x forward net profits, and those estimates could see further downward revisions going forward — estimates were reduced slightly over the last three months, and more of that could be coming, e.g. due to the negative news from China.

Many other EV companies are trading at way lower price to sales multiples, which are generally around 2 for NIO (NIO), XPeng, Li Auto (LI), versus a sales multiple of more than 6 for Tesla. BYD, Tesla’s biggest and fastest-growing peer, is trading at just 2x this year’s revenue, too, while growing much faster than Tesla.

So while Tesla’s downside potential is now more limited than one year ago, it is far from guaranteed that Tesla’s shares will bottom soon. Shares could easily fall further, I believe, especially if earnings estimates start to decline more meaningfully or if other additional negative news emerge.

Buying into stocks that are rising can feel good, but it can also be dangerous. Those that chased Tesla during the COVID bubble have paid a steep price already, as Tesla is down almost 60% so far this year.

With a wide range of problems, headwinds, and risk factors, Tesla could see its shares decline further, however. Once the bubble has popped, there is no guarantee that a bottom will be reached in a short period of time.

The Asset Allocation Facts Have Changed